Steven Spielberg’s Munich is an uneven thriller. The director tries to rationalize a world gone mad over the Israeli-Arab conflict as he assumes with great self-importance that he can speak for everyone even though he’s pro-Israel, as he makes an effort to humanize the Arabs by showing them as caring family people. Munich is about the 11 Israeli athletes killed at the 1972 Munich Olympics by Palestinian terrorists and the response by Israel’s Mossad to secretly assassinate 11 of their members in retaliation. The Israeli leaders stated in unison “the world must see that killing Jews is an expensive proposition.”

It’s meant as one of Spielberg’s darker and more serious movies (which it is!), though it’s not necessarily one of his better ones. It comes with no big name stars, unless you consider Eric Bana (starred in Hulk) a household name, but with a number of confusing moral and political messages and ends up as more or less a means of making atonement for sins of the past than a fully realized film. In roughly two and a half hours it grimly takes us through a number of gory assassinations of the bad guys and hauntingly reminds us of their evil deeds with continual gruesome flashbacks to their actions in Munich. As they are killed one by one, including those from collateral damage, Spielberg lays on us a lecture, in the form of a loaded dialogue, that it’s not good to act like the terrorists and kill them without bringing them to justice. But, then again he says, what else can be done? Spielberg melts down with this guilt trip after rejoicing that they were eliminated and therefore can’t kill any other innocents, but he soon questions these killings and refuses to allow us to feel the sweetness of revenge. Unfortunately for the troubled Spielberg you can’t have it both ways and his moral dilemma becomes the film’s. Whatever good storytelling abounds (and there’s plenty of that, especially in the powerful opening), is ruined by stopping after every assassination for a guilt check and a long harangue directed to the viewer about the evil nature of terrorism and how counter-terrorism is a much more complicated response because when you kill one leader another takes his place (who is usually worse) and the cycle of violence just continues. The result is a thought provoking film that doesn’t provoke much thought other than the obvious that both sides of the Israeli-Arab conflict are paying a high price for this war and the vengeance motive might not be the best response on further reflection after seeming the only response at first. It’s meant also to be an entertaining film, but lacks the thrills for it to be a first-class thriller; it’s also too prosaic to be an art film, even though it presents ideas and controversies that go far beyond what is seen in the usual mainstream action film.

It’s based on the unverifiable 1984 book “Vengeance” by the Hungarian-Canadian writer George Jonas (it was based on testimony by a former Israeli intelligence agent who’s information has been challenged by those in the know) and penned by the oddball team of Tony Kushner (“Angels in America”) and Eric Roth (“Forrest Gump”). The book was filmed before in 1986 by HBO and called “Sword of Gideon,” a film I didn’t see.

It opens with the attack on the Olympic Village by a Palestinian terrorist group called Black September. After unwittingly given a hand over the fence by a drunken group of American athletes, they kill two Israeli athletes in the village and abduct the other 9 after a fierce struggle and take them to the airport demanding an unimpeded flight out of Germany and that both Israel and Germany release all Palestinian prisoners. Israel rejects that demand and a standoff between the terrorists and police is seen on television with the American ABC crew covering the Olympics, headed by sports announcer Jim McKay, and that tape is used by Spielberg to revisit those tragic moments. It soon becomes clear that the German response is inadequate, as it ends in confusion and tragedy on the airport tarmac. As a result Israeli Prime Minister Golda Meir approves the plan to make the Palestinian terrorists pay dearly for their terrible crime with an under-the-radar counter-terrorist attack and justifies such illegal actions by saying “Every civilization finds it necessary to negotiate compromises with its own values.” A young married Mossad agent, Avner (Eric Bana), whose wife is expecting their first child, is taken off the Mossad’s payroll and given sufficient funds in a Swiss bank account by his devious Mossad handler (Geoffrey Rush) and is asked to act as the team leader of an unauthorized four-man hit man crew—a gung-ho quarrelsome South African hit man (Daniel Craig, the new James Bond), a nervous diplomat and clean-up man (Ciarán Hinds), a reluctant nerdy Belgian bomb-maker (Mathieu Kassovitz), and an antiques dealer who is a document forger (Hanns Zischler). They are ordered to assassinate those terrorists involved in the Munich attack. They work in secret and their paper trail is cleared so that they have no connections to the Israel government, which doesn’t even have a death penalty. We follow the assassination team as they travel all over Europe (Rome, Frankfurt, London, Paris, Athens and Cyprus) and even to Beirut, killing their targets with great efficiency but with increasing guilt. Avner made contact with an amoral French anarchist family-run radical group willing to give up for a hefty price info on radicals to other radical groups but not to other governments. In a comical way Louis (Mathieu Amalric) becomes Avner’s contact man and eagerly provides him with the location of those on his hit list, while the main man is his bourgeois father, known as Papa (Michael Lonsdale), and seems a genial host living on a spacious country estate who is only too glad to show off his skills as a chef and how he rewards his family for its loyalty by being such a good provider. These two smug professional information brokers are seductive in their banal evil believing only in family and money, and not giving a darn about what’s right or wrong in the world.

The hit squad begin as believers in their mission, but in the long period they are together they witness how the terrorists retaliate after their assassinations with hijackings, letter bomb attacks and more assassinations — and begin to doubt their mission and a depression sinks in that they are no longer just soldiers but executioners.

Spielberg talks through Bana’s bland idealistic character, depicted as the soul of Israel (or, Spielberg’s alter ego), to tell his pro-Israel side of the story but to also recognize that the Arabs have justifiable grievances and are suffering even more so than the Israelis from all this violence. Avner, who performed heroically all that his government asked of him, is haunted by what he did (we know this because when he’s shtupping his wife, he can’t get the bloody Munich attack out of his head). The now retired Avner is challenging himself if what he did was morally right or if his actions would stop any future bloodshed. Avner’s ashamed that he lost his sense of righteousness (a so-called Jewish lament for their long history of suffering that claims they survived because they always took the high road in defending themselves and kept the dream alive so that they would have one day a homeland to practice what they preach) and in the end is so ashamed of himself that he can’t decide whether to return to Israel or remain an exile in Brooklyn.

In Spielberg’s harangue against fighting violence with violence (a similar theme handled with much more skill in David Cronenberg’s A History of Violence), he blames all sides and makes us want to despair like he does at the hopeless situation that has only gotten worse since Munich. But the writers don’t have it in them to run with this tormented take on terrorism and therefore can’t add anything that wasn’t said better in recent documentaries such as Route 181 and One Day in September or make the story compelling or suspenseful or as emotionally responsive as is demanded of such a provocative film. The overall flatness, it’s half-baked characterizations and its annoying way of being repetetive, make this a dreary watch without giving the viewer much to get too excited over. Today’s ongoing Israeli-Arab conflict demands more than merely stating the obvious that seeking a violent solution is no answer and that doesn’t happen here despite the film being interesting in that it’s an earnest plea for peace through dialogue and tackles a tragic event by trying to do more than pay homage to the victims and lionize those who retaliated as patriots. 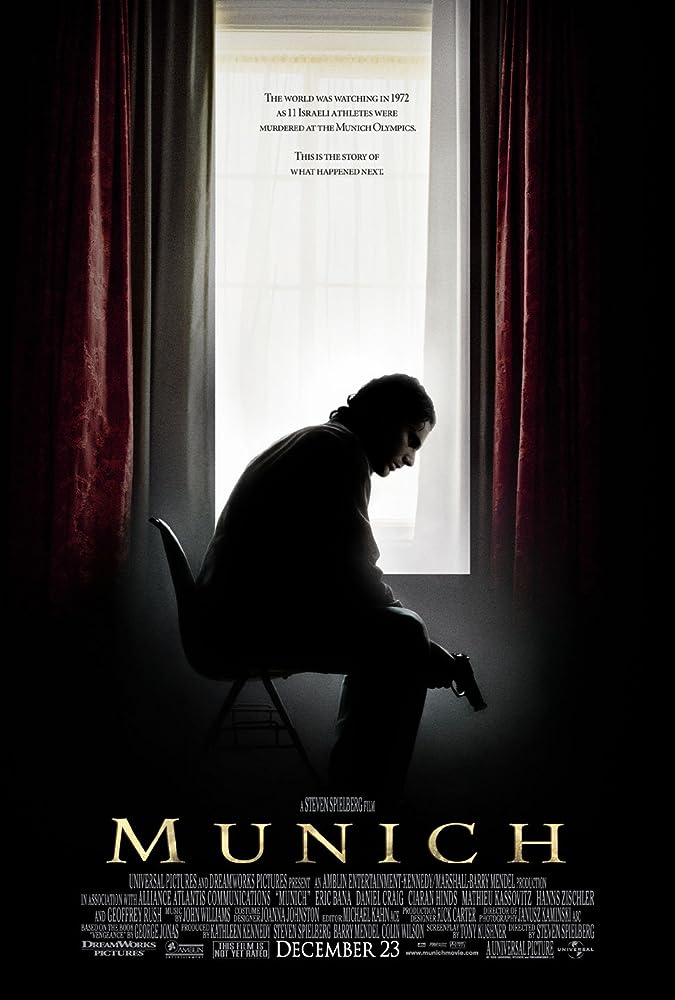