“It plays like a serial chapter adventure shown during matinees in the 1940s.”

The Mummy’s Hand was the first of four lesser sequels to Universal’s classic The Mummy (1932). The other sequels, all inferior in decreasing merit to these first two Mummy films, are the following: The Mummy’s Tomb (1942), The Mummy’s Ghost (1944), The Mummy’s Curse (1944) and Abbott and Costello Meet the Mummy (1955). Christy Cabanne (“Scared to Death”/”Dixie Jamboree”/”Danger on Wheels”) directs from a story by Griffin Jay, who cowrites it with Maxwell Shane.

The film opens with Egyptian professor Andohep (George Zucco) summoned to a remote ancient temple in the desert by his dying high priest father (Eduardo Ciannelli), who relays to him the tale of Kharis (Tom Tyler). In ancient times he was the high priest of the temple but was buried alive with his tongue ripped out when he tried to steal the life-giving tana leaves with the purpose of reviving the recently deceased Princess Ananka, someone he loved. The professor is sternly warned that he must keep the site of Ananka’s tomb safe from curiosity seekers or treasure hunters or deflers ot grave robbers or archaeologists who might be trying to steal its buried secrets of eternal life and mess with the old religion of his forebears.

The ambitious out-of-work NYC archaeologist Steve Banning (Dick Foran) is visiting Egypt with his moronic Brooklyn friend Babe Jenson (Wallace Ford), and while in a Cairo bazaar Steve buys an invaluable broken vase that in its hieroglyphics gives evidence of the burial place of the ancient Egyptian princess Ananka. At the Cairo museum the Egyptologist scholar Dr. Petrie (Charles Trowbridge) verifies that it’s authentic, while the sinister museum curator, Professor Andohep, the new High Priest of Karnac, says it’s a phony and breaks the vase–refusing to fund a museum archaeology expedition to find the truth. Instead the dynamic duo meet in a bar a fellow Brooklynite who is a visiting stage magician named Solvani (Cecil Kelloway) and convince him to fund an expedition instead of going home. The magician’s pretty daughter Marta (Peggy Moran) thinks her father’s new partners are swindlers and tags along with the trio of men to the desert to keep them honest when they go to find the tomb that will make them all rich and famous (actually if Andohep wasn’t a psychopath, he has a point about those ugly Americans desecrating and raiding a sacred site). When a few members of their expedition get mysteriously murdered, the serious archaeologist is not scared off and uncovers the secret passage of the tomb of the mummy Kharis. In great danger, because the evil Andohep is at the site feeding Kharis life by giving him tana leaves that allows him to walk menacingly with a limp and use his super-strong hand to choke his intruder victim’s to death. Our heroes in the climax must rescue the kidnapped Marta from the madman Andohep’s attempts to make her his immortal wife and the boys also must fight off the powerful living mummy by outwitting him and then setting him on fire.

It plays like a serial chapter adventure shown during matinees in the 1940s. Ford is around for comic relief, Zucco to be the heavy and Foran to be the bland hero who romances the equally bland Moran. The best one in the film might be veteran cowboy star Tom Tyler, as the mummy who comes to life in a menacing way even if he never shows us his face under all those bandages and blackened eyes and never utters a sound. The low-budget film uses footage from other Universal films and offers enough thrills in its climax to please those who favor this genre. But the film was so derivative, that even Hans J. Salter’s musical score was lifted from the Son of Frankenstein. 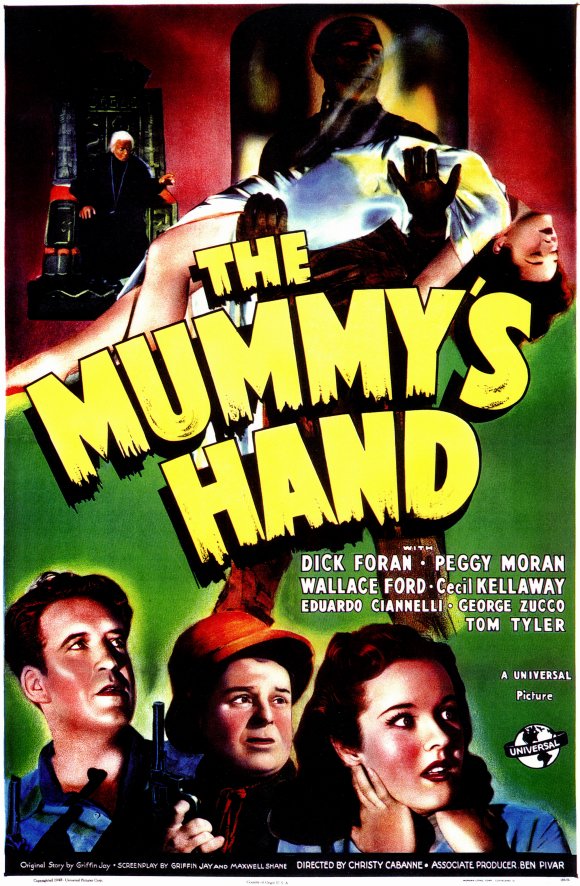