A spoof on the 1932 horror classic The Mummy, in which Boris Karloff played a dead priest who returns to life and falls in love with the pretty girl he feels is the reincarnation of the woman he died for. Unfortunately, in this ridiculous remake, the two films are only the same in name; though, in the broad sense they are both about a three thousand year Egyptian curse. This Mummy put me into a petulant adolescent mind-set, as I found myself madly screaming for more script, more story, and more tomes. After seeing this stinker, I found that I could only calm my rage by going to the videotape of the original Mummyand seeing again for myself how richly quaint that classic film actually was.

This is a film that lives for the cliché, even relishes in it, flaunting it as the reason the film was made in the first place. It is so much like those trashy “B” films in the early 1950s, in those “good old days” when you got to see two pictures like this for the price of one and didn’t give a hoot how unbelievable the hero was. This film is a return to that dumbness, only this time its appeal is targeted for a more mature crowd and the price of the movie ticket has skyrocketed — and, there’s no second feature.

This is a children’s serial adventure thriller, the Indiana Jones kind but without that film’s charismatic actors. It is about a high priest, Imhotep (Arnold Vosloo), who couldn’t keep his hands off his lover, the Pharaoh’s daughter and was tortured to death by the Pharaoh when he was caught in the act. As his punishment he is “mummified alive,” sealed inside a sarcophagus with scores of flesh-eating scarab beetles (which take their time in killing him). If his tomb is opened, and if he is brought back to life, he will “bring about a walking disease” and unleash the 10 proverbial plagues upon Egypt and the world. So wouldn’t you know it, his tomb is opened inadvertently by some ugly American tourists!

In the 1920s an American French Foreign Legionnaire named Rick O’Connell (Fraser) is fortunate to have an Egyptian scholar and librarian named Evelyn (Weisz), the plucky English woman, save him from being hanged. She does so because he knows how to find the hidden city (having escaped from there once before) where the dead Pharaohs are mummified and lots of gold is buried. He joins with her and her annoying brother Jonathan (Hannah) in their adventure as fortune hunters to find Hamunaptra, the City of the Dead.

Rick is one cool guy, with a self-deprecating sense of humor, an unflappable personality, and one eye for beauty and the other for battle; in other words, a man’s man. His mission in this film is threefold: to rescue the damsel in distress, kill the bad guy, and save the world. He teams up with the infatuated Evelyn, who pines for him with bated breath and also earnestly digs being an expert in mummies. They race to the cursed city against other American fortune hunters with their lackey Beni (O’ Connor) leading them there. The heroine tells us that this lackey is so wormy a character, that we know already he will surely get his come-uppance by the time the film ends. There are also bands of mysterious, black-robed nomads, who have something to do with keeping tourists away from the lost city. The other so-called delights in this special effect and overlong film are the gibberish messages read from the holy books, the one-liners coming off the lips of the characters faster than the bullets from their blazing guns, and all the free-spirited action scenes that are non-stop. This gives the film a lighter than lighthearted look. After seeing mummies becoming alive again and rising from the sand and enough gruesome killings to last me a few millenniums, all I can say is: Mummies! 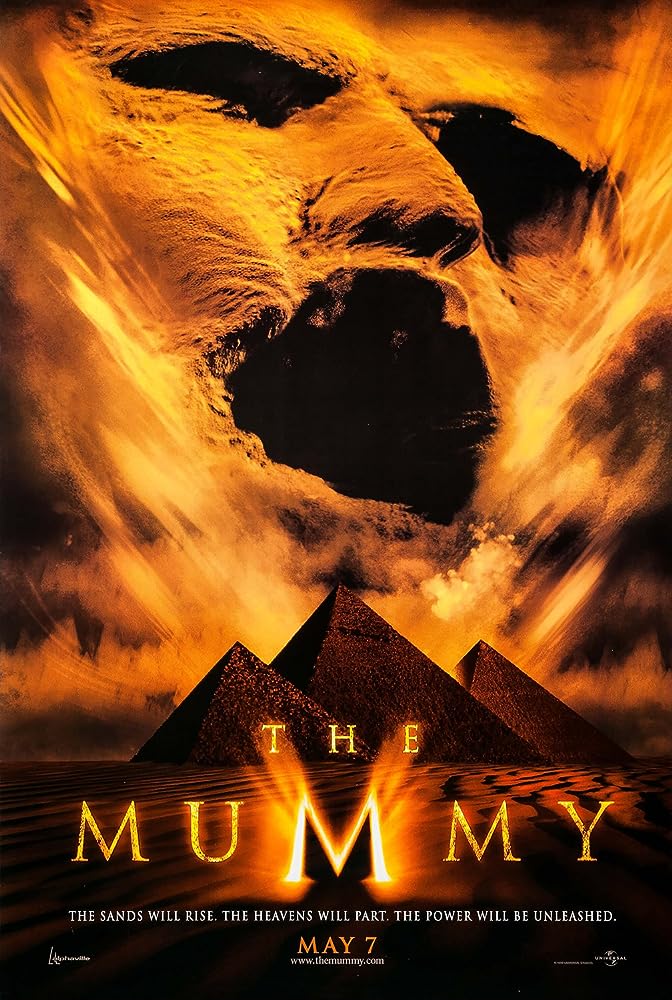