MUCH ADO ABOUT NOTHING

Director Joss Whedon(“The Avengers”/”Serenity”) shifts gears from helming his previous smash hit Hollywood blockbuster, Marvel’s Avengers, to this labor of love cheapie budget black and white modern-day version of Shakespeare’s Much Ado About Nothing, set in a country house in Los Angeles (shot in the director’s Santa Monica house). The classic comedy was shot in 12 days and with an ensemble cast of Whedon’s TV people (mostly fromhis television series “Buffy the Vampire Slayer”), who dressed in suits and sipped vintage wine throughout. Whedon keeps most of the Bard’s language and the quirky pic, reminiscent of the 1930s’ screwball studio romcoms, with squabbling lovers, offers a supposedly witty absurdist view of love.

It didn’t work for me, as it seemed to reduce the Bard’s play down to the level of a TV sitcom and though following the Bard’s words it nevertheless sounded cartoonish, much too glib for my more purist Shakespearean ears and ultimately seemed like a gimmicky pic that tries to get over as high brow art while investing so little energy.

The cast consists of Fran Kranz as the repeatedly deceived lovelorn Claudio, who is coupled with the virginal Hero (Jillian Morgese). She’s the daughter of the governor Leonato (Clark Gregg).The young couple’s chance of connecting is almost ruined by the cruelty of the schemes of Don John (Sean Maher). The sparring lovers are Benedick (Alexis Denisof) and the sharp-tongued Beatrice (Amy Acker), Hero’s cousin. While Nathan Fillion’s dumb cop Dogberry is around for comic relief.

It’s low-key to a fault, also the screen is filled with schemes, mistaken identity and deceptions.

Though it’s not terrible, neither is it terribly good. Nevertheless I found it more enjoyable than Whedon’s popular big-budget film, yet less enjoyable than a straight stage version of the Bard. 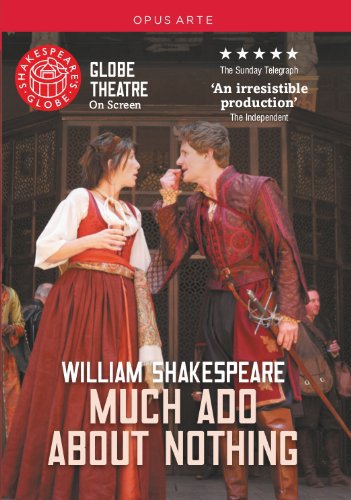