Trashy action pic directed with a calm dispassion by Richard Fleischer (“Narrow Margin”/”Conan the Destroyer”) from an Elmore Leonard story that was written for Clint Eastwood, who turned it down because of scheduling problems. It’s the standard issue Bronson hero film, and is competently made and acted. The former Vietnam Ranger vet Vince Majestyk (Charles Bronson) is a Colorado watermelon farmer who defends the gas station bathroom use for Mexican workers when the attendant turns them away. At his farm, the corrupt labor contractor, the mob connected, Bobby Kopas (Paul Koslo), insists Majestyk use the workers he chooses.

The peaceful good guy turns the psychopathic gun-pulling bigot away after he tells him he hires his own workers and pays them fairly. Nevertheless he’s jailed when the bigot registers a police complaint about being assaulted. Majestyk’s actions endear him to the migrant union activist Nancy Chavez (Linda Cystal) and it kindles a romance. While in jail Majestyk crosses a bad-ass pompous mob hit man, Frank Renda (Al Lettieri), who extorts money from the local farmers. While on the prison bus to go to trial, his men execute an escape. But Majestyk makes a deal with the police to turn Renda over to them in exchange for a pardon.

The hit man retaliates by crushing the legs of one Majestyk’s migrants with a car that backs him up against a wall and then destroys his watermelon crop by shooting it up. It leads to a car chase and gun battle culminating at the hunting lodge in the hills, where Majestyk told police he would deliver Renda. The virtuous farmer tells Renda to get on with the gun battle so he can get back to harvesting his melons, which is all he cares about.

Though it wants to tell an expose migrant farm worker story, it doesn’t. Instead it’s the usual Bronson good guys vs. the bad guys stories. This is probably enough to satisfy Bronson fans, in one of his better films. 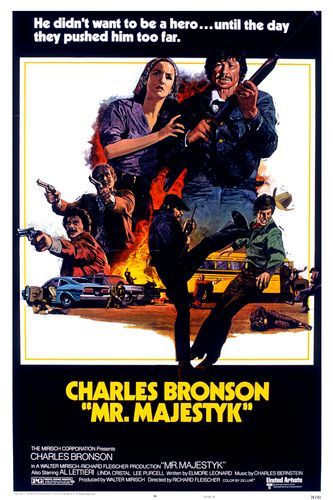