“Everything played well for me.”

The melancholy restrained mood piece tells us something about Mozart’s life that not many may know. French filmmaker René Féret (“Rue Du Retrait”/”Madame Solario“), an actor turned filmmaker, is writer and director of this fictionalized historical biopic about Mozart’s talented older sister Nannerl (Marie Feret, director’s daughter). The film depicts her as almost as musically accomplished as her 10-year-old brother, someone she’s five years older than. Nannerl is a fine singer amd player of the violin and harpsichord. In the 1760s, in France, Wolfgang (David Moreau) is but a child prodigy, who tours Europe by coach with his family performing at royal courts. Sister Nannerl is his accompanist. The middle-aged pushy stage father Leopold (Marc Barbé) follows the social mores of the times and after this grand tour stops his daughter from composing and playing the violin. Though he tells his wife (Delphine Chuillot) that their daughter is a real talent. As a result Nannerl eventually becomes a wife, a mother and an unrecognized historical potential genius (but genius is something Féret can’t say with certainty) compared to her genius brother. The moving account tells of the reactionary times that prevented Nannerl from achieving the greatness she merited and how peeved she became. One can only speculate what great musical heights she could have reached if born in modern times and had equal opportunities to compete. Her parents are portrayed as products of their time, unable and unwilling to fight society. The result is their obedient daughter as a young adult abandoned her music. It then speculates on a friendship between Nannerl and the daughter (Lisa Féret), the director’s younger daughter) and the dauphin (Clovis Fouin) of Louis XV. Féret relies on Leopold’s letters and scholarly writings to speculate on the family situation and how they got along. The sumptuous French costumer has marvelous Mozart pieces and has an intelligent scenario. The characters reflect the age they come from and unlike a spate of recent Mozart films it refuses to psychoanalyze them in modern terms or revise their history. Everything played well for me, in this most engaging film. 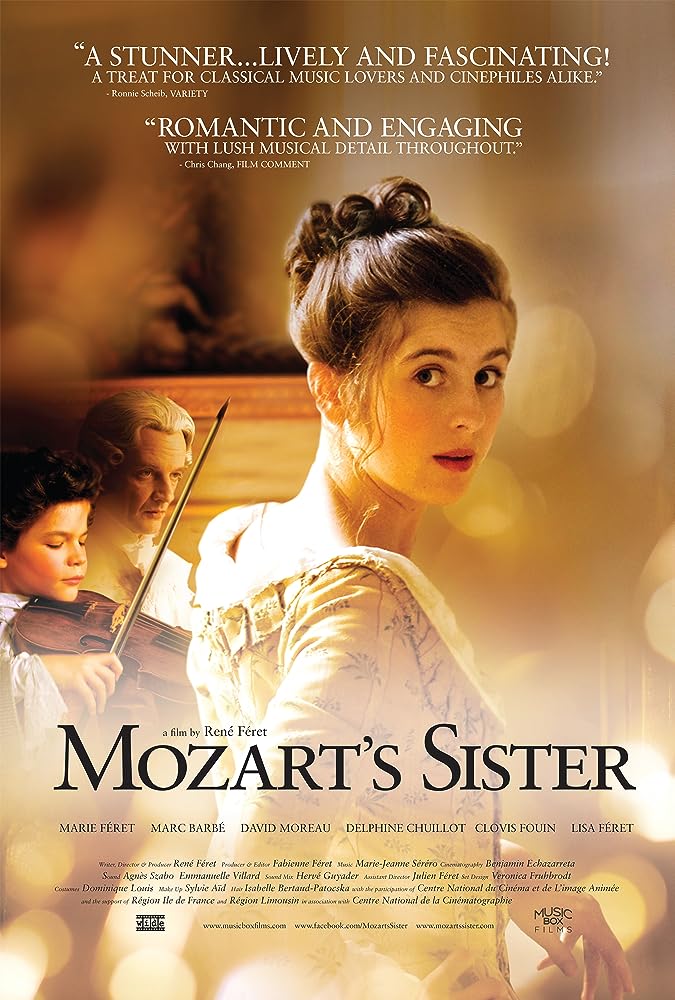