The original director Fritz Lang had trouble relating to star Jean Gabin and was replaced by veteran studio filmmaker Archie Mayo (“Bordertown”/”The Petrified Forest”/”Four Sons”), who directs without inspiration this mushy Hollywood romantic drama posing as film noir. The routine pic remains only so-so despite looking fine and benefiting from stellar performances by acclaimed French actor Jean Gabin, in his first Hollywood flick, and the always reliable Ida Lupino. Supposedly the two carried on a love affair during the shoot, which might explain how hot were the pic’s romantic moments. Moontide is based on the novel by the actor Willard Robertson; it is weakly written, without a shred of reality, by novelist John O’Hara.

French-born tough guy Bobo (Jean Gabin) is a brooding drifter dock worker, who ends up in the Southern California coastal town of San Pablo. His untrustworthy parasitic mercenary friend Tiny (Thomas Mitchell) finds jobs for the carefree Bobo and sponges off him while he loafs, as he seemingly knows some dark secret about Bobo that he holds over him. Tiny locates Bobo in the dockside Red Dot bar and urges him to go with him up the Northern California coast to get high paying jobs. Instead Bobo gets drunk, flirts with bar girl Mildred and ends up sleeping on a bait barge belonging to the kind-hearted Chinese-Americans “Henry” Hirota (Chester Gan) and his son Takeo (Sen Yung). They offer Bobo a job selling bait on the barge, while they fish for sardines.

That morning while working on the barge Bobo learns that Pop Kelly (Arthur Aylesworth), a grumpy old sailor whom Bobo also met, was choked to death during the night and that somehow Bobo wound up with his sailor’s hat. That night Bobo walks along the beach with the friendly philosophizing nightwatchman Nutsy (Claude Rains) and rescues would-be suicide Anna (Ida Lupino), a poor ex-hashslinger, from drowning. The outcasts live together on the barge, which leaves the creepy Tiny jealous. To get Bobo to leave with him, he hints to Anna that Bobo killed Pop Kelly and threatens to turn him in unless Anna leaves Bobo. Anna instead talks to Bobo about his weird relationship with such a rat like Tiny and accepts what he tells her. They get married aboard the barge, but on the wedding night Bobo is called away to fix the engine of a philandering doctor’s (Jerome Cowan) boat. When the drunken Tiny comes to the barge Bobo’s dog growls at him in a hostile manner, but Anna leaves him tied to a leash. After Tiny tries to rape her, it dawns on Anna that it was Tiny who killed Pop Kelly and when she confronts him the treacherous blackmailer beats her nearly to death. When Bobo returns to take his wife to the hospital for life-saving surgery, he figures out that Tiny is responsible for his wife’s injuries and catches up with the terrified Tiny at the end of the docks. Bobo can’t help Tiny from drowning when he jumps into the sea to escape from his threatening advances, and the gloomy pic goes out with a happy ending of the blissful couple reuniting on the barge to live happily ever after as a humble couple 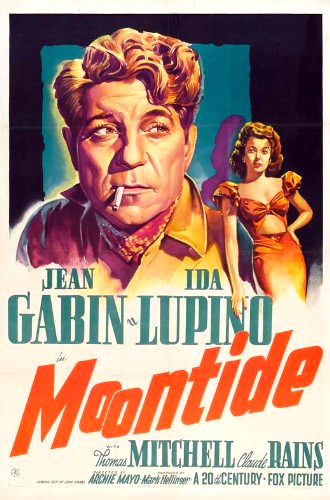