MOON IS BLUE, THE

“Known today because it challenged the Hollywood Production Code.“

The Otto Preminger (“Laura”/”Fallen Angel”/”Whirlpool”) directed ‘bedroom farce’ lightweight romantic comedy is known today because it challenged the Hollywood Production Code enforced since 1934 and used for the first time on film since then words such as ‘virgin’, ‘seduce’ and ‘mistress’ in the dialogue. When viewed today the film is tame, and all the fuss made upon its release that caused the big studios not to release it and Preminger willing to make it a test case against censorship problems, ensured its place in film history and why the innocuous independently made film is still remembered today. The controversy of being released without production code approval and being banned by the Legion of Decency was enough to make The Moon Is Blue a box-office smash.

It’s a stage-bound film that’s based on the hit play by F. Hugh Herbert, who also wrote the screenplay.

Preminger simultaneously shot a version in German starting Hardy Kruger and Johanna Matz, who had a cameo in the English-language version as tourists.

The handsome 30-year-old bachelor architect Donald Gresham (William Holden) picks up the 22-year-old talkative struggling actress Patty O’Neill (Maggie McNamara, her film debut) on the Observation Tower of the Empire State Building in New York City. They go to his fashionable Madison Avenue bachelor pad after he’s made to promise ‘affection rather than passion,’ where she shows off her homemaking abilities by making him dinner and sewing on a torn button on his suit jacket. Patty learns that Don broke up last night with his fiancée Cynthia Slater (Dawn Addams), who lives in the same building with her divorced 41-year-old playboy father David Slater (David Niven).

While Don goes out in the rainstorm to buy the groceries, Patty is visited by Cynthia. The jealous woman leaves abruptly, refusing to wait for Don’s return. The next visitor is Cynthia’s debauched charmer sophisticate father. He’s surprised at Patty’s frankness, and is invited by Patty to stay for dinner.

David discusses with Don why he didn’t seduce Cynthia last night when she slept over in his apartment, which has made his daughter irate. When Cynthia calls threatening suicide unless Don meets with her, this prompts him to again leave the apartment and he chats with her in a nearby bar. Don again rejects Cynthia’s seduction. Meanwhile David is smitten with Patty and proposes to her. She doesn’t bite at the offer, so he offers her $600 if she will wait 15 weeks before seeing another man. When Don and Cynthia return to his apartment, they see Patty kissing David and misinterpret the friendship kiss. Later when Don and Patty are alone, Cynthia’s assessment of Patty as a “professional virgin” upsets Patty. While Patty is changing her ketchup-stained dress in the bedroom, her old-fashioned Irish policeman father (Tom Tully) comes over after finding out where she is from her roommate and knocks out Don when he sees his daughter in his bedroom.

The film ends as a supposed victory party for virginity, when the next day the level-headed Don and the nutty Patty meet again at the Observation Tower of the Empire State Building and both realize they’re in love. Thereby Don proposes.

The mildly amusing comedy about a girl remaining a virgin, which according to Patty is so a man won’t lose respect for her reputation, is about an unlikely romance that takes place once in a blue moon. What keeps this frothy film interesting, in a perverse way, is that the goody-two-shoes Patty comes across as calculating while the two playboys are viewed as much more sympathetic figures despite all their conniving attempts to score a virgin. That Preminger is able to do that, despite it appearing to be otherwise, impressed me greatly even though the talky film itself leaves a lot to be desired and its chatterbox heroine left me less than engaged with her irritating antics to join those already locked into conventional marriages. 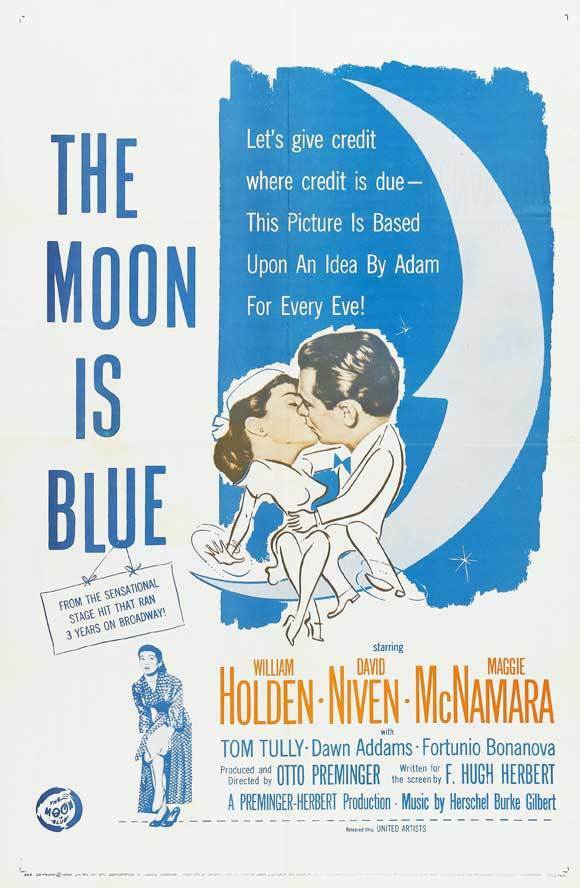