I think I’ve seen this film before: it’s called Pulp Fiction. But that aside this is a very funny crime caper, involving double-crosses, kidnappings, and outrageous shootouts. It is stylized noir–meaning that this modern noir film is not to be taken as seriously as the noir films from the 1940s and 1950s. This style is now used by many directors as a spoof of the genre, as it is in this flick by the first-time woman director, Jennifer Leitzes. The film relies on its characters to make things happen, as the storyline really is too slight to do the complete job of making Montana bigger than the small state of mind it is.

Nick Roth (Tucci) is dying of cancer. Claire Kelsky (Sedgwick) is Nick’s hit man partner in the big city syndicate. The big boss being Robbie Coltrane. He is someone Claire has worked for during the last twelve years and is very loyal to, as she feels she owes him all that she has.

The title of the film is derived from Montana being thought of as a symbol of what is ideal, an escape from the rotten world of big cities and crime. It is the state to go to when one is through trying to play the crime game.

In a very funny scene the crime duo get the wrong Asian in the trunk of their car and when they realize their mistake, they toss him on the gutter and go after the Asian who robbed their boss. They then cuff him to the radiator in the boss’s headquarters, so they can sweat out of him the information of where is the stolen money. But they are being set-up by the organization’s moneyman, Duncan (Philip Seymour Hoffman). He gets the boss’s ear and poison-tongues the only two in the syndicate who remain loyal to the boss.

The boss’s sexy girlfriend Kitty (Tunney), who wants to leave the boss but can’t, slips the handcuffed bagman a gun. When the boss interrogates the bagman, he tries to kill the boss. But Nick shoots him before he can fire. Meanwhile Kitty has taken a powder and the boss doesn’t know who gave the bagman the gun, concluding that he wasn’t searched properly.

As a punishment for screwing up, the boss sends Claire and Nick to retrieve the money. He also insists they take along his obnoxious and mentally deficient son, Jimmy (Embry). Nick tracks the suitcase of money down by talking with the bagman’s wife. Meanwhile Claire and Jimmy locate Kitty but when Claire leaves him alone with Kitty, junior wants to rape her; and, as he gets on top of her, Kitty grabs his gun and blows his head off. Nick and Claire know they are in trouble now, that it will be hard to explain this to the boss. But Claire says she has faith that the boss will trust her after all those years together. Nick tells her not to go alone to the boss.

A silent partner of the boss’s, Dr. Thomas Wexler (Ritter), has written a book on the Step Program. It is one of those self-help motivational books that has gotten him quite a following. He is doing an infomercial when Claire and Nick approach him and he reveals to them that he has hired Duncan and most of the men in the boss’s organization to double-cross the boss.

Wexler orders his men to kill Claire, and in a funny scene Claire is seen digging her grave while two of the gangsters watch as a little boy questions what she is doing. Claire will outwit the men and kill them. The little boy returns, curious to know why she is now filling up the hole and wanting to know where the men are. There is also a spoof shootout scene, with all the boss’s men coming after Claire and Nick in a swank hotel room with their guns blazing away. It was scenes like this, coming in flashes, that kept the film alive.

Stanley Tucci is a marvelous actor and is a joy to watch. Kyra Sedgwick works well with Tucci and significantly adds to the farcical nature of the film. Philip Seymour Hoffman never gives a bad performance; here he is the creepy turncoat, a part he can do in his sleep by now. But he does it well. The high level of acting raises this ordinary film in stature, but does not make it into anything more than a highly entertaining film. 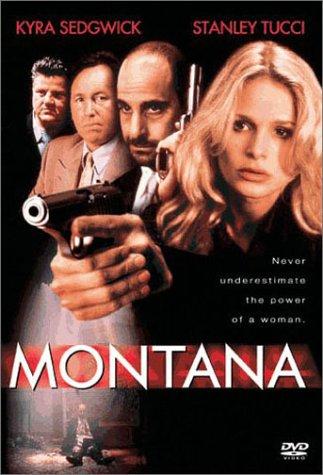