A powerful, complex, emotionally charged human interest drama about change suddenly happening to a real person (not a Hollywood cookie-cutter type) as he has to face his inward racist demons, in a part of the country where racial attitudes are changing but prejudice is still apparently deep-rooted. The film makes the white bigot out to be a regular guy whose racism is a natural part of his makeup, someone we have all probably met and not some obvious monster we can’t relate to. He will help out a black woman in trouble and an unlikely relationship will develop between them, as they provocatively confront the same fears many in the country have about racial mixing. It also shows how the two lovers struggle to get along to just survive and are so lost and lonely but they are capable, when given the chance, of seeking their own personal happiness over their set beliefs.

The 31-year-old Swiss-born and NYU film school graduate, Marc Forster (Everything Put Together), directs a film about a racist who overcomes his hatred because of a family tragedy that makes him become more open-minded and thoughtful and brave, as he finds that he needs to be with someone to make him feel good again. In the hands of a wrong director this could have played like a liberal lesson in morals about the evils of racism and the death penalty and been merely a didactic exercise. Instead this is a heartfelt and probative melodrama that has the white racist struggle in his own inarticulate way to try to explain himself convincingly to the black woman he wants to be with, that there’s a decent side to him that can be brought out in the right circumstances. The film wisely uses the emotional loss of both the white and black families against the lingering background of the South’s resistance to change its old racist way of life, to show that all sides have lost something dear to them. Therefore each character is forced to learn more about how they function in order to overcome their misery — which makes this film so unique and inflammatory as a character study rather than an overview of racism. In the film’s ambiguous characterization of the two lovers, it gambles in its conclusion that maybe since we have seen both their worst (they have both been bad parents) and best sides (they are both capable of doing the right thing) that maybe, against all odds, their love affair based on need might work.

The film is set in a contemporary rural Georgia small town, where Hank Grotowski (Billy Bob Thornton) and his only son Sonny (Heath Ledger) are currently Georgia corrections officers, they are following in the footsteps of Sonny’s retired correction officer dad, the bullying racist invalid with emphysema, Buck (Peter Boyle).

The Grotowski father and son are assigned Death Row duty in the execution of a cop killer. Hank supervises the prisoner’s walk to the electric chair and of the strapping him into the chair; while Sonny, who is not psychologically fit to work in a prison, is part of the team that carries this out.

The other story is about Leticia Musgrove (Halle Berry), a pretty black waitress whose husband Lawrence (Sean “Puffy” Combs) was lost to her when he was arrested 11 years ago and is now about to be executed; she can’t manage things on her own, as his absence leaves her on the verge of losing her job and her house. Their 12-year-old son Tyrell (Coronji Calhoun, he’s ten) is a good kid but he disappoints her because he has no will power to stop eating and is obese. This causes her to hit him and be angry and ashamed of him, but she still can’t stop loving him.

The film depicts Buck as a grouch filled with racial hatred who can’t accept change, while Hank is also an outspoken racist who is reconciled to living a miserable life. Sonny is a more sensitive soul and is seen as being condemned by his family for being friendly with his black neighbor Ryrus Cooper (Mos Def, rapper/poet) and his two boys. His father tells him that he hates him and his grandfather says he’s a weakling.

Hank’s wife committed suicide and that has left him bitter, and it has left Sonny without an ally to relieve all the racial intolerance he is poisoned with while living in his grandfather’s house. It is only the routines in life that Hank is left with from all his grief and loss, as he is just satisfied to go to the same diner and every time order black coffee and chocolate ice cream he only eats with a white plastic spoon (speaking of racial symbols). On his job, he is mostly concerned that he wants everything to go smoothly during Lawrence’s execution. But when Sonny messes up, this becomes too much for Hank to handle and it leads to a chain of events that will alter Hank’s life forever.

It takes a few chance encounters for Hank and Leticia to meet, not aware that they have a connection through the execution. But slowly they come to rely on one another to make them feel good again from all the misery they have recently been through and when they each learn in their own way how they are connected, they each must learn how to live with that. The film makes no big deal about that openly, but lets the viewer absorb what affects it has on them by wisely shunning a formulaic confrontational scene in favor of quiet scenes where each is seen absorbing that knowledge in their own quiet way.

It is through some really fine acting performances on the part of both actors that allows us to see them actually feel each other, as they overcome the heavy-handed part of the melodrama. The actors prevent any messages sent on racism from sinking the film with a phony ring to it. Both actors show courage in their roles and make their characters vibrant and unpredictable and filled with vulnerability, passion, and an inner toughness. When nude together and making love, the scenes were dramatic and fitting for what they were searching for in each other. This is an actor’s film and these two actors make this pic sparkle with intelligence and insight-fulness.

The title “Monster’s Ball” comes from a custom in medieval England where prisoners awaiting execution were called monsters. The night before their execution, their jailers would hold a feast known as a monster’s ball as their final farewell.

The following info was included in my program notes: the film was completed with a production budget of $2.5 million. The top three stars (Thornton, Berry and Ledger) deferred their up front fees which would normally add up to around $15 million. Writers Addica and Rokos (a native of Georgia), actors by training, both auditioned for and landed roles in “Monster’s Ball,” their own film. Addica plays a member of the death team and Rokos the warden. 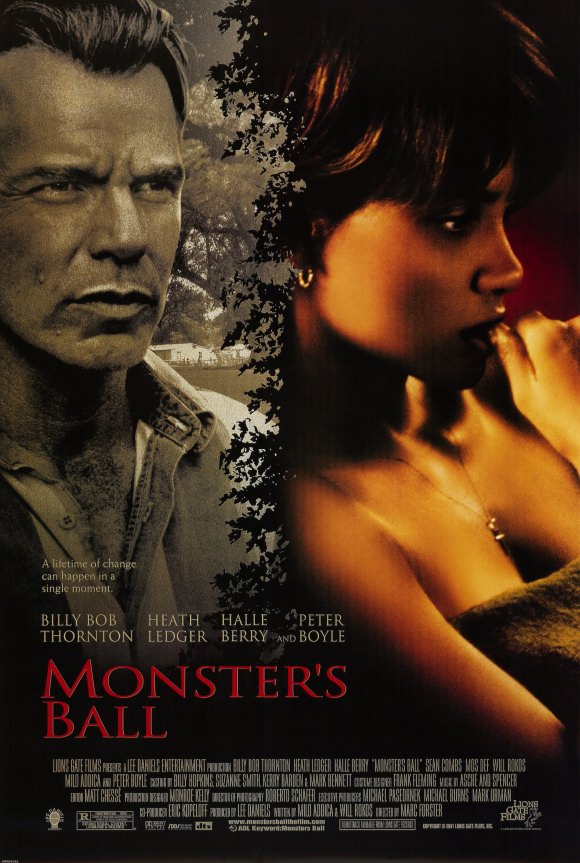