This psychological murder mystery by Patrice Leconte (“Ridicule”/”The Widow of Saint-Pierre”/”The Man on the Train”) is based on a novel by Georges Simenon; it was filmed before in 1946 as Panique by Julien Duvivier.

Monsieur Hire (Michel Blanc) is a middle-aged reclusive character, who works as a tailor during the day and at night is a voyeur. The loner, always elegantly dressed, is disliked by his neighbors because he’s anti-social and stands apart from them because he does not conform. When a local 22-year-old girl is killed, he becomes the prime suspect because a taxi driver eyewitness saw someone running into the courtyard of the apartment complex where Hire dwells. The investigating police inspector (Andre Wilms) hounds him and pumps him with offensive questions. While being a “peeping tom” to the attractive young woman Alice (Sandrine Bonnaire), who has an apartment opposite his, she notices him watching her one evening, during a lightning storm, while making love to her boyfriend Emile (Luc Thuillier) and visits him. She learns that he witnessed that her good-for-nothing boyfriend Emile murdered the girl and she was an accessory to the crime. Not squealing because he fell in love with Alice and does not want her to do jail time, he ends up meeting Alice and starting a tender relationship with her that makes him the happiest he’s ever been. When her boyfriend skips town because the police are hot on his trail, Hire contrives to take her to his country retreat in Switzerland and shelter her from the police. The inconceivable relationship of the two lonely lost souls, comes with an enigmatic twist ending that it would be unfair to reveal.

It’s a challenging and atmospheric film, filmed in a subdued way and with great economical skill, that is concerned with things such as voyeurism, loneliness and love. The murder itself is almost like an afterthought, as Leconte’s sole aim seems to be to get in the head of his star-crossed protagonist. Michel Blanc is superb as the hapless oddball character, even if the story itself is slight and never reaches any great depths of insight. 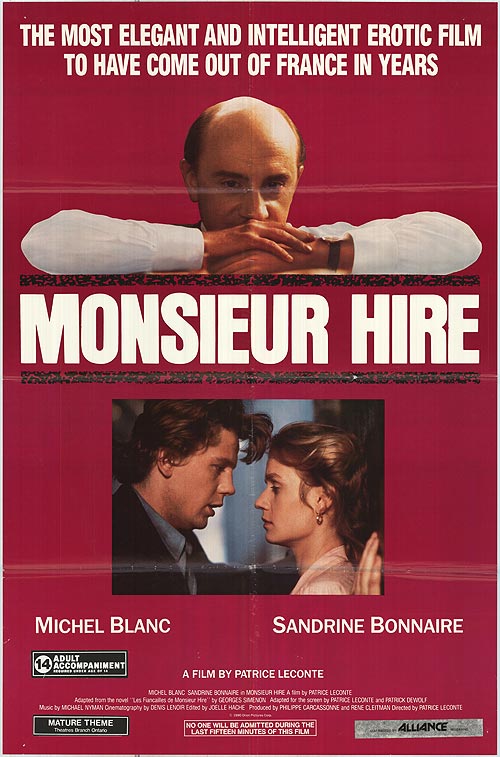