MOB, THE (REMEMBER THAT FACE)

“The Mob” covers the same territory as “On The Waterfont.” It is adapted from the novel “Waterfront” by Ferguson Findley and directed with a flair for lively action scenes by Robert Parrish. This ordinary minor film noir holds together until one twist too many turns it into one of those old movie theater chapter serial-like endings.

Sergeant Johnny Damico (Broderick Crawford) comes out of a jewelry store at night after buying his nurse girlfriend Mary (Betty Buehler) an expensive engagement ring and he witnesses a man gunned down in the unlit street. When Johnny is about to arrest him, the man shows him a legitimate police badge and Johnny is fooled into letting him go. The police commissioner and his precinct boss, Lt. Banks (Otto Hulett), insist that he goes underground to capture the killer. They say he is the same individual who is the mastermind behind the waterfront rackets, Blackie Clegg, and the one he just murdered was to be a witness in an upcoming racketeer grand jury investigation. Johnny is chosen because he’s the only one who has a chance of identifying the killer, even though he hardly saw his face in the dark.

The police fake a story that he’s been suspended because of that incident and he’s given the alias Tim Flynn and provided with a falsified record as a petty criminal from New Orleans. Johnny works his way around the docks by acting tough until he gets to meet some of the gangsters, Gunner (Brand) and Castro (Borgnine), who try to frame him for a murder they committed. But Johnny perseveres the police brutality at the stationhouse by crooked cop Sergeant Bennion and gets closer to the mysterious mob boss who runs the racket’s kickback scheme, where the honest longshoremen have to give part of their salary to get work.

One of the surprises is that a longshoreman he’s suspicious of, Clancy (Kiley), is an undercover insurance investigator working a different angle of the racket operation, and when the two realize that they are on the same side they work together to make a key arrest. The other surprise is the bartender called Smoothie, who takes the undercover cop to meet the boss.

Broderick Crawford is believable in this heroic role and moves his character into a noir figure by his hard-boiled, no-nonsense approach to the dangerous situation, where he’s not in control of his destiny. Ernest Borgnine has the natural look of a shady individual to give his role a sinister force. Neville Brand as a strong-arm enforcer for Borgnine adds to the violent atmosphere. The film has fistfights, tough talking thugs and cops, and a bleak view of the corrupt docks. The brutality of both the criminals and the police is what gives the film its shock value and special feel. Otherwise it’s your ordinary violent crime film. 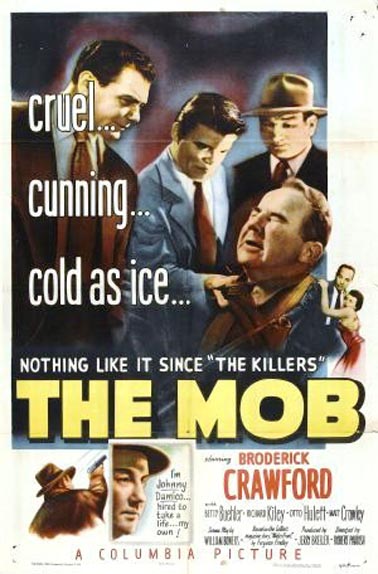