THE MISSING JUROR (aka: TOMORROW WE DIE)

Budd Boetticher (“Ride Lonesome”/”Seminole”/”Seven Men From Now”), former cowboy and bullfighter, works his way up the studio system to expertly direct this taut low-budget programmer nail-biter. The crime thriller puzzler is from a story by Leon Abrams & Richard Hill Wilkinson, that’s a piece lifted from the I Love a Mystery radio series. The crisp screenplay is by Charles O’Neal.

When ace news reporter Joe Keats (Jim Bannon) discovers that Jason Sloan was the fourth juror murdered after the murder conviction trial of the gentle wealthy Harry J. Wharton (George Macready), who was sentenced to be executed for murdering the low-class Marie Chapel, he warns his cynical editor Willard Apple (Joseph Crehan) that all the jurors are in danger for convicting the innocent man. The jury reacted to the false evidence of a bought off witness, the private detective Sasbo (George Lloyd), who was paid by Marie’s former lover to frame Wharton. When Sasbo is shot in the street, before he dies he gives to Keats and other witnesses a deathbed confession of his foul deed. That comes in the nick of time to get Wharton a full pardon, but unfortunately Wharton lost his marbles while incarcerated and is confined to the insane asylum for treatment. While in confinement Wharton’s cell goes up in flames and an unrecognizable burned body, assumed to be that of Wharton, is found hanging from the ceiling.

Joe is ordered by his editor to do a sensational story on the surviving jurors and begins a flirtation with one of the jurors, the classy blonde antiques dealer Alice Hill ( Janis Carter, aspiring opera singer). When Keats meets the jury foreman Jerome K. Bentley (also Macready), who is buying antiques from Alice for his country house, he arouses Keats’ suspicion by mentioning he knows who the murderer is and will identify him by dawn. Because of Keats’ suspicious nature, he’s able to recognize that the jury killer is still on the loose and he saves Alice’s life as the vengeful killer comes after her and his her trapped in his house.

Boetticher does a good job of building the tension and does wonders to make this B-movie story, lacking psychological punch, come to life because of the dark atmosphere created, droll sense of humor and solid acting. It’s hard to make a pulp B-film any better on such a limited budget. 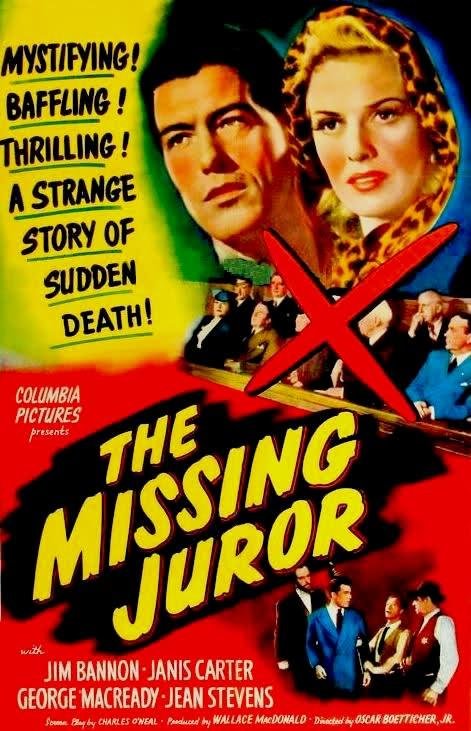