“A powerful, influential and tense political thriller based on a true story.“

Costa-Gavras (“State Of Siege“/”Z”/”The Sleeping Car Murder”) directs a powerful, influential and tense political thriller based on a true story (though slightly fictionalized) of the execution of a left-wing young journalist during Chile’s military coup in 1973, supposedly because he knew something that would involve his government in the coup. The controversial film unabashedly tells about the covert US involvment in the 1973 military coup of the democratically elected socialist Chilean president, Salvador Allende, something denied by the Nixon administration. It’s based on lawyer Thomas Hauser’s book The Execution Of Charles Horman, and is tautly and passionately co-written by Costa-Gavras and Donald Stewart.

It’s the first English speaking Hollywood film made by Costa-Gavras. Jack Lemmon gives one of his best performances ever, earning him an Oscar nomination for best actor. It did win an Academy Award for Best Adapted Screenplay. The film was shot in Mexico.

Conservative Christian Science New York businessman Ed Horman (Jack Lemmon) travels to Santiago, Chile, when his counterculture daughter-in-law Beth Horman (Sissy Spacek) informs him her spirited offbeat writer and filmmaker husband Charlie (John Shea) is inexplicably missing after the bloody right-wing military coup in September and the American Embassy is not helpful (they are the visible villains of the film and include the oily consul David Clennon, the treacherous security man soldier Charles Cioffi and the double-talking ambassador Richard Venture, who are never truthful). In the end, Ed finds out through the Ford Foundation’s economic adviser that he heard his son was executed a month ago when interned in Chile’s National Stadium with thousands of other leftists. It’s believed that about 750 of them were summarily executed without any kind of trial.

The businessman at the end of his torturous visit, of getting the runaround from the embassy officials for over a month, learns that he was wrong to blindly believe his government as he discovers the hard way that his government cares more about the interests of big business over those of its ordinary citizens. Though dad came here disapproving of his flaky son’s free-spirited lifestyle, he leaves upset learning that the establishment figures he always admired are liars and not trustworthy of protecting the basic democratic values of his beloved country–something his son and radical friends are willing to do despite being so naive and powerless.

What’s haunting is the violent street scenes and the excessive force mounted by the ominous military patrols, as they crackdown on curfew violators and known political rivals in a mind-boggling brutal fashion. They act like fascists, bolstered by their unreported American advisers, intimidating the population to the point that even during an earthquake the citizens fear going outside and violating the curfew.

Few films impact real life like do the films of Costa-Gavras. This one rattled the US government so much, that upon the film’s release in 1982 the then-Secretary of State Alexander Haig, appointed by President Reagan, was forced to issue indisputable denials of the film’s allegations–a statement only believed by the gullible. 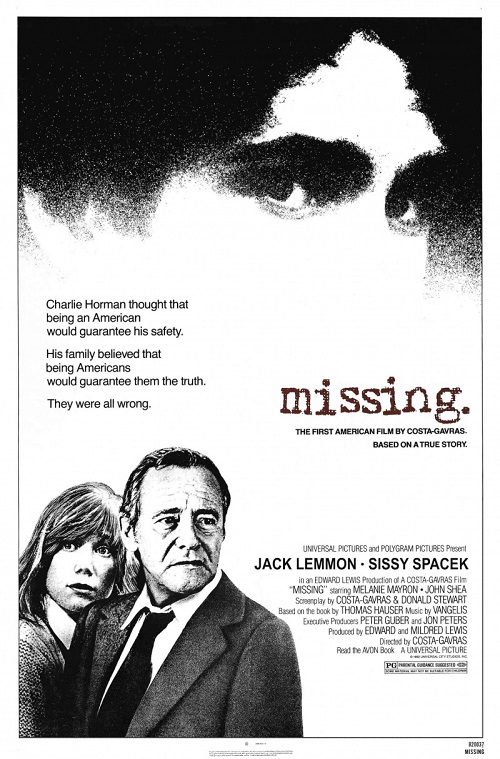