MISSILES FROM HELL (BATTLE OF THE V-1)

An effective low-budget Brit WW 2 war story based on true incidents. The Brits work with Polish partisans, who sabotage the German rocket installation at Peenemunche.

Vernon Sewell(“House of Mystery”/”The Blood Beast Terror”/”Ghost Ship”) keeps things moving at a brisk pace. Though predictable it’s entertaining. Though the many subplots are a distraction and keep things muddled.

Writers Jack Hanley and Eryk Wlodek adapt it from the book by “They Saved London” by Bernard Newman.

Polish school teacher Stefan (Michael Rennie) is assigned by the Nazis to work at a labor camp. He’s recruited by the Polish resistance to be their inside man. Tadek (David Knight), Stefan’s watchmaker friend, works with him. They discover the Germans are secretly building a rocket. The parisan spying leads to the blowing up of the factory where the rocket is built. The second part of the spying mission calls for them to get a photo of the rocket for British intelligence. The efforts of the resistance enables, in 1943, the Brits to stage a raid at the site and transport a rocket back to England. 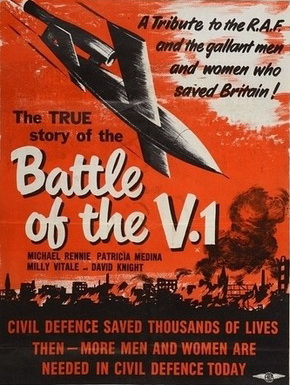