“A surprisingly darker film than most of those for ‘feel good’ filmmaker Frank Capra.”

A surprisingly darker film than most of those for ‘feel good’ filmmaker Frank Capra(“Forbidden”/”State of the Union”/”It’s A Wonderful Life”). Capra gave the film’s 24-year-old star Barbara Stanwyck her big break by starring her in Ladies of Leisure (1930), and this was the second of five movies she would make for her favorite director. It’s based on the play “Bless Your Sister” by John Meehan & Robert Riskin, and is sharply written by Dorothy Howell and Jo Swerling. What’s marvelous, is how hard the filmmaker comes down on phony opportunistic evangelists who bilk the public. The main character Stanwyck plays Sister Florence “Faith” Fallon, who is the thinly disguised controversial show-biz publicity headline-grabbing evangelist of the period Aimee Semple MacPherson. The healing preacher was known for her uplifting oratory on radio and her lavish road touring show-biz circus services.

The opening scene is a legendary ‘don’t miss scene’ in cinema history, as Florence Fallon (Barbara Stanwyck) gives the final unfinished sermon of her deceased pastor father who was unfairly fired by the country church after 20 years of service and who died broke and heartbroken for being so rudely treated by their callous dismissal of him. In the fiery sermon, Florence clears out the congregation by calling them out as a bunch of hypocrites. Con man Bob Hornsby (Sam Hardy), a visitor attending the church for the first time, applauds Florence’s harangue and the unsavory promoter feeds her poisoned mind with a way to get even with those who wronged her family by staging money-making phony “faith healing” sessions during her services. The snarky Hornsby tells her “Religion is great if you can sell it, no good if you give it away.”

The heart of the film covers in an expose style how lucrative the religious racket could be. It has Stanwyck, no double, working in the same cage with live lions as she preaches to the suckers, separated only by an invisible netting. The bewitching pic concludes with a massive tabernacle blaze, and Sister Fallon standing as a lost soul in the middle of the blaze. The story also successfully exposes Florence’s soft-side when she falls for the blind in the war aviator and songwriter John Carson (David Manners), who alters his suicidal plans after hearing her preach on the radio and thinks she can cure him. Through this cautious love, Florence finds redemption and turns to being a humble soldier for the Salvation Army.

At this point in her early movie career Stanwyck is a raw and instinctive actress, who is at her best on ‘first takes.” When Stanwyck later develops her essential acting techniques, she becomes one of Hollywood’s brightest stars and legends. This well-staged dramedy has Capra impressively show us how close the truth and the lie can be to each other and how it sometimes takes uncovering a lie to dig out the truth. It’s wonderful Capra, at the top of his game. 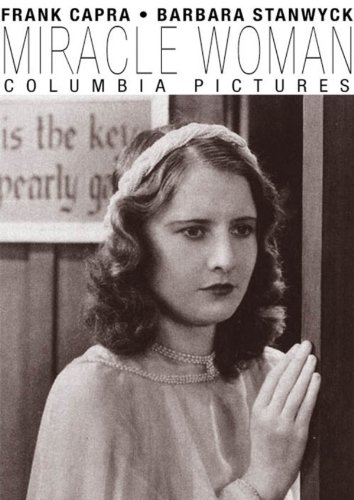