This 15-part serial is the last film made by legendary silent film cowboy Tom Mix, who was in his fifties at the time. It’s a curio serial that has all the faults and pleasures of the B-Western.Co-directorsB. Reeves Eason and Armand Schaefer have come up with a commercially successful formula, as the film grossed $1 million on its release. The story is authored by Barney A. Sarecky and Wellyn Totman, while the screenplay is written by John Rathwell. This has become, for better or worse, the film the diminutive cowboy hero, wearing the oversized cowboy hat, is best remembered for even though it’s creaky, slight and pedestrian.

It opens by tracing how the Indians were booted off their land by bellicose and greedy whites, despite the efforts through the decades of the 19th century of people like Daniel Boone, Davy Crockett and Buffalo Bill to look out for the Indians. Given their own reservations by the U.S. government, the action picks up in 1912 at the Ravenhead Reservation. A Texas Ranger is killed protecting the reservation from reservation jumpers, and in 1930 his son, Tom Morgan (Tom Mix), becomes a captain in the Texas Rangers and wears his father’s badge and has the same protective feelings toward the Indians as his dad. Tom recovers money stolen from the reservation and is made a chief among the Ravenheads and is given the name “The Miracle Rider” by Chief Black Wing (Bob Fraser). Sleazy oil manZaroff (Charles Middleton) has ambitions to be the richest and most powerful man in the world. The heavy secretly mines a highly explosive ore used for munitions called X-94, which is found on the Ravenhead Reservation. To get all of it, Zaroff schemes to kick the Indians off the land. He plays on the superstitions of the Indians to scare them with an evil spirit of a firebird in the form of a glider, as he uses the secret halfbreed Ravenhead Indian Longboat (Bob Kortman) to betray his tribe, as he aspires to be chief at any cost.

Tom will thwart Zaroff’s many schemes and try to bring him to justice for killing Chief Black Wing, and will be aided by Ruth (Joan Gale), the chief’s pretty daughter, and his smart horseTony Jr. The hero uses old-fashioned values of honesty, loyalty and a sense of community to win the day and save the world from an evil man with designs to make the world his oyster. 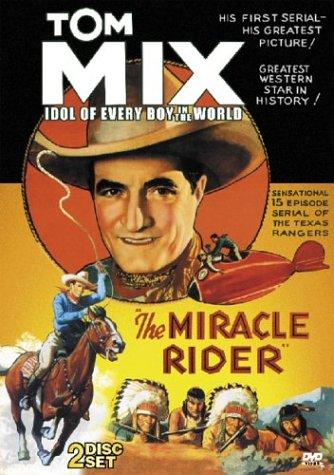