“Should have the targeted fanboy crowd wetting their briefs over all the in-your-face violence.”

Another summer blockbuster dumb comic book story made into a trashy movie that should have the targeted fanboy crowd wetting their briefs over all the in-your-face violence and their veins popping out of their necks with anger at any so-called effete who dares to not make nice to their baby. It’s the first English-language feature film directed by the Russian fabulist Timur Bekmambetov (“Nightwatch”/”Daywatch”) and is based on the graphic action-packed story by Michael Brandt and Derek Haas and the comic books by the Scotsman Mark Millar and J. G. Jones. There’s the feeling given off that anything goes here, as it just piles up all the garbage to see how bad a stink it can make; it includes such dicey goings on as torture-porn and a wild off-the-chart car chase in traffic that has Angelina Jolie flip her red sports car over and around a bus while firing away at an assassin. In its dizzy killing pace it frantically leaves no time for the viewer to think about what might be happening to their brain cells while watching such an adrenaline feast fit for a junkie loony bird. Bekmambetov channels the Wachowski Brothers into making it a video game flick but also adds his own brand of over-the-top mayhem, making this an even more far-fetched teasing actioner that’s destined to be the ultimate in sicko revenge-of-the-nerd fantasy fulfilling films. It’s a Fight Club without even the few ideas that feeble revenge-of-the-nerd film had.

It’s set in Chicago (shot in Prague). Wesley Gibson (James McAvoy) is a lackey office account manager who is not a happy camper at the workplace or at home. He’s constantly badgered by his fatty boss Janice (Lorna Scott), he’s broke, an apologetic wimp, has frequent anxiety attacks over stress that keeps him on meds, everybody uses him as a doormat and his shrewish girlfriend Cathy (Kristen Hager) and his best friend Barry (Chris Pratt) are cheating on him behind his back and he does nothing about it even though he knows. In other words, Wesley’s a pathetic loser. But things are about to change for our cubicle hating whiny boy, as his Everyman nerdy dream comes true of a beautiful chick coming into his life and with him growing powerful in a flash. One day, out of the blue, Wesley’s asked to join a secret fraternity of assassins by a heavily tattooed tough-cookie vixen clad in black leather named Fox (Angelina Jolie), who saves his life from an assassin in a convenience store. After an outlandish chase with the assassin, the kid and Fox make a connection as the foxy killer lady takes the stunned lad to a textile factory. We learn that in the factory’s back room there’s the meeting place for a 1,000 year-old Fraternity, founded by weavers, who live by the code that “if you kill one maybe you can save a thousand lives,” using a blind selective assassination process that’s presented here as a logical way to keep evil in check. Wesley’s chosen because the dad he never knew, who deserted him at childbirth, was the other day murdered on the roof of the Metropolitan building by a rogue colleague named Cross (Thomas Kretschmann). Dad was an elite fraternity member and the kid possesses the same innate ability as dad to curve bullets with his mind, which becomes the reason for the invite. The smooth overseer of this group of assassins is Sloan (Morgan Freeman), who operates with his team an execution ring where they await orders to kill as it comes over in encrypted code messages from the swath weavings of a magical loom (like yeah, we’re supposed to swallow such Mickey Mouse crap!). The kid, because of his unique superpower skills becomes the only hope of the underground Fraternity to take out Cross, who is aiming to eliminate everyone in the Fraternity. The sadistic team of instructors–Butcher (Dato Bakhtadze), Gunsmith (rapper Common), the Exterminator (Konstantin Khabensky) and the Repairman (Marc Warren)–quickly train Wesley to be a killer, endure pain and know that every job has the perfect weapon (later we will see how an army of rats is used as the perfect weapon).

This is the ‘perfect storm’ of a movie for those who find cartoonish violence entertaining; it’s an empty and preposterous movie that not only has nothing worthwhile to say about nerds, foxy broads, assassins or how power corrupts, but hits a very low level of idiotic entertainment even for a dumb summer movie. Since the story line is totally ridiculous, Bekmambetov puts all his energies and skills into the CGI effects to give us all the graphic pleasures possible in watching a high body count movie whereby this mindless exercise in ultraviolence can keep us glued to our seats by showing a number of ways heads can explode when a bullet travels in slo-mo through air that somehow ripples like water. The CGI effects highlight the bullet as it bores into the vic’s skull and blood splatters (Boy, I can’t tell you how much fun that was to see!). It ends with a now nervy Wesley, after spending the last six weeks of getting into the swing of things as an assassin and no longer a pussy, speaking into the camera to tell all the assumed nerdy viewers that they too should get control of their lives and make something of themselves like he did. This passes for a crude type of pinhead humor, of making a big joke out of putting down the audience and recruiting them to join in on the fun. In the end, we are supposed to be assured that even a loser like McAvoy can become the “Man,” and therefore it’s also possible for anyone else if they just buy into this sicko product they are selling (like those old Charles Atlas comic book ads). What’s desperately wanted in Wanted is something to put into its empty head besides a bullet, like maybe it could have had an idea or two–if that’s not asking too much. 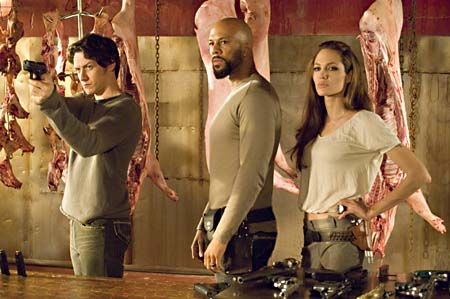 WICKED AS THEY COME