MIDDLE OF THE NIGHT

Delbert Mann (“Marty”/”The Bachelor Party”/”Desire Under The Elms”) capably helms this old-fashioned sober drama based on the play by Paddy Chayefsky. The screenplay by Chayefsky was easily transferred from TV to a movie, with some changes that had the supporting characters more involved in the subplots. Its TV production is often cited as a good example of what was meant as the Golden Age of television during the 1950s, but the dialogue goes over today as a bit too heavy and the film is not much more than a routine solid mature drama. The incomparable Edward G. Robinson brilliantly played the lead role on Broadway, in 1956, and Gena Rowlands played the supporting role. In 1954 it originally played on TV with E. G. Marshall and Eva Marie Saint.

Jerry Kingsley (Fredric March) is a sixty-something melancholy widower of two years. He’s a lonely wealthy Manhattan garment center manufacturer with a womanizing business partner (Albert Dekker), who is locked into a longterm loveless marriage. The factory’s flighty 24-year-old receptionist who doubles as the part-time model for the clothing manufacturer, is a recent divorcee named Betty Preisser (Kim Novak). The fragile office worker was scarred by her loveless last relationship with her jazz musician husband (Lee Philips), and finds it easy to talk to her spry boss.

Jerry falls in love with the attractive Betty despite the wide gap in their ages. He has a twenty-five-year-old married daughter Lillian (Joan Copeland) and lives with his possessive spinster sister Evelyn (Edith Meiser), who reacts negatively to the romance. On the other hand, his daughter finds the love interest intriguing, glad to see dad having some fun, but has reservations about it because of the age difference.

After seeing each other for several weeks, Betty insists they stop seeing each other because Jerry is her boss. Jerry feels rejected, believing it’s because of his age, and out of vanity lures her to the factory where they passionately make love. Showing he can make love like a young man, Jerry optimistically plans for their wedding. Meanwhile the jittery Betty has second thoughts about this awkward romance, while her outspoken crude mom, Mrs. Mueller (Glenda Farrell), whom she lives with, calls Jerry a “dirty old man”and rails against this obscene marriage.When Jerry tells his sister about the marriage, she calls him an “old fool” and fears being displaced by this fortune hunter; while Jerry’s daughter might have been once intrigued about the affair, but now calls the neurotic relationship a formula for an unsuitable marriage. Jack (Martin Balsam), Lillian’s husband, is the only family member who congratulates his father-in-law on the upcoming marriage.

The film shows the lovers in conflict if they are right for each other and doesn’t reveal them married in the conclusion, but shows them handling some touchy melodramatic situations that at first separates them but then brings them closer together as they throw logic out the window in favor of emotional responses.

The romantic drama is recommended for those who wish to see how they did it back then when presenting touchy subject matters. The literate screenplay about ordinary people with deep emotional needs trying to survive and find love in their mundane lives is appealing but never that exciting. That it wasn’t that exciting is probably one of the main reasons it didn’t do well at the box office–because it certainly was well-acted (though March as a Jewish businessman left some doubts), the no-nonsense story was sincere and viewer friendly, and its ambiguous rosy resolution probably made enough sense to the romantics in the audience. 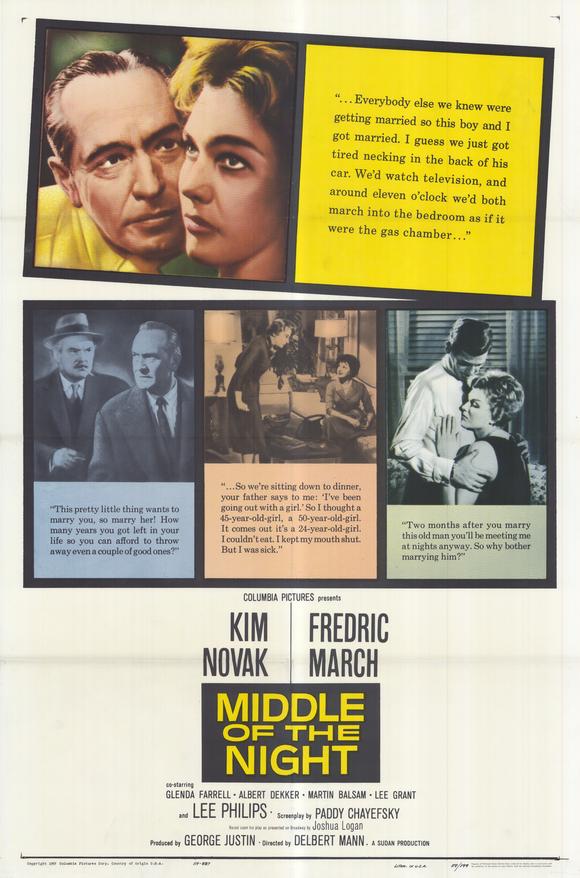