“Slow moving but gripping true story based on a terrorist incident of religious violence that shook up the French in 1996.“

Former actor Xavier Beauvois (“Don’t Forget You’re Going to Die”/”Nord”/”Le petit lieutenant“)directs and cowrites with Étienne Comarthis slow moving but gripping true story based on a terrorist incident of religious violence that shook up the French in 1996. Its aftereffects still resonate in France.It’s set just outside the remote village of Tibhirine, in Algeria’s Atlas Mountains, where dwell eight gentle French Trappist monks living in a rural monastery, the Cistercian Monastery of Our Lady of Atlas, built in the middle of the 19th century. The pious monks live a simple life devoted to God and participate in group prayers and unison singing, cultivating their garden, doing household chores and raising honeybees to sell their honey in the market. Though the monastery has the shadows of France’s colonization of Algeria and the hard fought war of independence hovering over it, the monks are here only for their own personal salvation, for peaceful purposes and to help serve others as humanitarians. They regularly interact with the Muslim locals–Luc (Michael Lonsdale) runs a clinic and provides excellent medical care, sound romantic advice and free shoes, while another monk helps an illiterate villager deal with filling out a visa.

The monks’idyllic life suddenly changes with the stabbing of a woman, by an Islamic fundamentalist, for failing to wear her veil in public and a fatal terrorist attack on Croatian workers who help the monks build projects. Their scholarly soft-spoken abbot, an Arabic scholar, Christian (Lambert Wilson), says that “staying here is as mad as being a monk.” For the sake of their safety the Algerian authorities ask them to leave or receive protection from the army; but the villagers want them to remain, so they vote to stay.They remain even after a threatening armed visit on Christmas Eve by a guerrilla terrorist group led by Ali Fayattia (Farid Larbi) demanding their medical supplies, where violence is averted only because the abbot quotes from the Koran. Soon the terrorist violence in the area increases, making their stay not a wise one.

In a Last Supper scene, where death is in the air, the monks pray, sing and drink wine to stave off their fear. As the music plays from a phonograph the concluding passage of Tchaikovsky’s Swan Lake, the monks are filled with reverie as we get reaction shots of all their faces looking heavenly. Beauvois admires the monks’ irrational resistance to be moved, that’s explained as an unwillingness to give in to evil forces, an unwillingness to desert the villagers (“the good shepherd doesn’t abandon his sheep to the wolves”), a fanatical brand of humanitarianism that has them act like Jesus and that the elderly men seem to think they have no other place to go to. That night another terrorist group takes them hostage and holds them as barter for a trade with the Algerian government for their captured comrades. As a result seven of the monks die under unknown circumstances (we are never sure if the terrorists killed them or if they were part of collateral damage from an army attack), with Jean-Pierre (Loïc Pichon), who hid under a bed, the only one still alive.

The gist of the film turns on whether or not the monks should have left for safety instead of choosing martyrdom, as they take an extremist position to stay even if it means death. This brave but questionable stance left many in France proud, who viewed their actions as a positive call for Christian values. For me the rational and right decision would be to flee for safety. To live for another day.I didn’t think it was such a wise and spiritual move to make, and there was nothing in the film that made me alter this opinion. But such religious fervor was appealing to the masses, and might appeal to someone whose beliefs are those of a peaceful Christian fundamentalist.

The film’s dramatization had a grave look about it, as if it was holding some revelation it was about to reveal. But it never did. It instead had its plodding religious moments and aside from being reverent and sympathetic to the beleaguered saintly monks, it took us inside their cloistered group and made at least two of their monks, the abbot and the doctor, seem human. Otherwise it never addresses the area’s more worldly issues of poverty, how damaging the French colonization was and that the occupation’s ill-effects are still in place.

The film had box office appeal in France, and was the winner of the Grand Prix at Cannes. 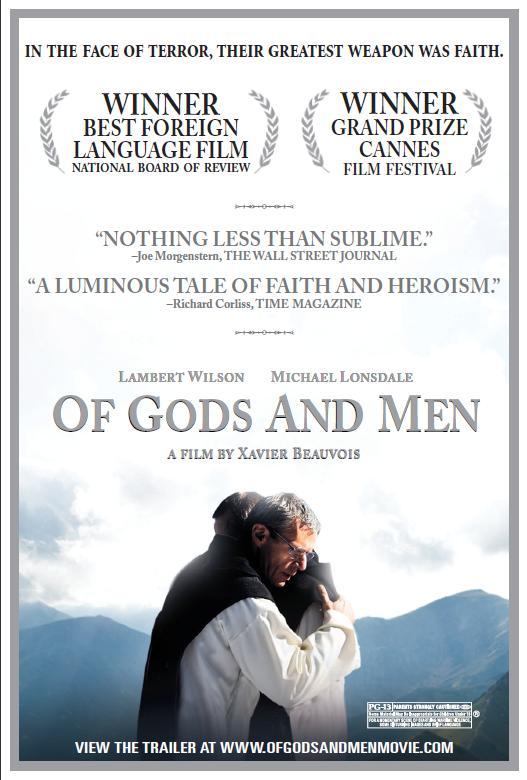