METALLICA: SOME KIND OF MONSTER

Acclaimed directors Joe Berlinger & Bruce Sinofsky (“Paradise Lost”/”Brother’s Keeper”) shot over 1600 hours of footage for about three years (2001-2003) while following heavy-metal rock band Metallica around to create this intimate documentary about them producing their album St. Anger (their first in five years) in San Francisco’s deserted military barracks at the Presidio. The popular band has been around since 1980 (their first real studio album “Kill Em All” was released in 1982) and has sold over 90 million albums. Three members of the group become the main focus–lead singer/guitarist James Hetfield, drummer Lars Ulrich, and singer/guitarist Kirk Hammett. Their bass player Jason Newsted just quit creating a void, which leaves producer Bob Rock sitting in for the missing bass player. The band has hired psychologist Phil Towle at $40,000 a month to help them express their feelings, contain their egos, provide therapy and hold their hand to ease some of the group tensions during the making of their album. What the shrink got them to spit out is that James and Lars don’t really like each other, but won’t split up. Why they won’t split up is any one’s guess because the shrink never got that far in his analysis, but one reason could be that they don’t want to kill a very good source of income that keeps flowing in or maybe it’s because they are too scared to go out on their own. For most of the film the band talk a lot of personal shit, have many chatty encounter group meetings and never seemed involved with the world but only in themselves. They are shown as flawed people who also happen to be rock gods, and must struggle to deal with their mental ailments as would ordinary mortals.

Getting the right subject matter is the key to the success of any documentary, and this film suffers big time because it got the wrong subject matter–the band’s trivial little personal problems never caught my interest and neither did their struggle to make a hit album and coin some more big moolah. Though the filmmakers get into the heads of this uptight rock group–made up of a self-absorbed drummer with a baby-face, an alcoholic lead singer with self-destructive anger management problems, and a mellow half-Filipino hippie guitar player who just wants to be cool (the designated good guy of the band)–there’s not too much about them that’s interesting. Lars initiates a law suit against Napster for downloading their music for free, James takes off a year to go into rehab for his alcohol problems and learn how to be sensitive, and peacemaker Kirk never has much to say about anything except some Buddhist thing about losing his ego. At the time of recording the album, the band was feuding amongst themselves and hadn’t worked for nine months.

Whatever these middle-agers were about and had trouble dealing with, which seemed to be adolescent things about being macho, not being understood, an ego identity crisis, a need to rebel, anger problems, a power struggle in the group and alienation, it never hit the right chord with me. I found them to be savvy businessmen, but cultural airheads and boring personalities and their aggressive emotional music gave me a headache. To hang around with them via video for over two hours was too much of a drag, though if this is your kind of music then the documentary comes to life as an honest look at the musicians who let it all hang out like in no other rock feature.

The film winds down in a lackluster way by getting back to business and away from all the bullshit talk about sensitivity, as a new bassist Robert Trujillo is hired and we sit in on a board meeting as the album gets a title. By this time the square looking balding middle-aged Towle has worn out his welcome, and Lars and James team-up to agree that it’s time the therapist leaves. Obviously, the group thinks it has gotten into “the zone,” either with the shrink’s help or despite him–it’s hard to tell, just like it’s hard for me to grok why Metallica is the most popular or the most hated heavy-metal band there ever was. Despite all the intimacies revealed about the band, they still seem like aliens without a concern about anyone but themselves. 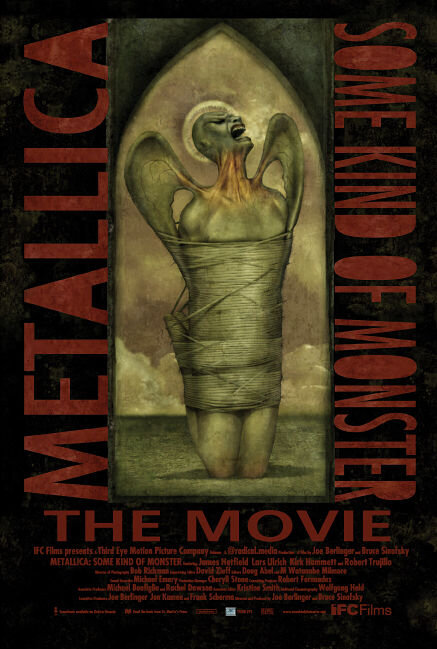