“A tough one to sit through.”

A purposefully obtuse and bizarre psychological mystery film about parallel realities directed by Jacques Rivette (“Secret Defense”/”La Belle Noiseuse”/”The Story of Marie and Julien”), that’s mostly rambling, meandering and nonsensical. Rivette co-writes with Eduardo De Gregorio and Suzanne Schiffman. The acclaimed French director reportedly had a nervous breakdown upon completion of the film. It sat on the shelf and wasn’t released until two years later in 1983. That it almost redeems its long haul of 160 minutes and its confusing head trip story line by coming up with a beautifully filmed climax, maybe is reason enough for not jumping ship and sticking it out until the end.

A pair of musicians, the bassist Barre Phillips and clarinetist John Surman, improvise a doleful jazz to open things. The musicians return periodically throughout the film, and might be the best thing about this turkey.

Andy Warhol fave, the scruffy Joe Dallesandro, plays New Yorker Ben Phillipps, while hippie-looking Maria Schneider plays the Parisian mystery woman Léo Hoffmann. They meet in a Paris countryside hotel in search of the elusive Elisabeth (Danièle Gegauff) after receiving separate telegrams from her to meet there. She’s the ex-girlfriend of Ben and Léo’s missing sister. The strangers wonder why Lisa isn’t there to meet them. But finally connect in the countryside following a few scavenger hunt like clues of hunting her down, and we learn the girls’ dad stole four million francs and probably faked his death in an airplane crash. This begins a labyrinthine plot, as Lisa is kidnapped and her friend Shirley (Sylvie Matton) appears on the scene with more confusing information for us to digest.

For most of the film Ben and Léo, who has the combination to the safe where dad hid the loot but no knowledge of where is the safe, playfully try to get acquainted and search for the missing Lisa and the dough as if they were tripping. They search empty houses and such when not running in the woods or in the dunes. The result is an overlong, dull, padded and pretentious film that is a chore to sit through. Though the goofy leads are as appealing as babies, but even this cuteness grows tiresome as the ponderous film plods on with barely a concern that it’s such a sketchy and lazily put together work. There are only minor indications that a talented filmmaker was behind this ignoble project.

This was supposed to be part of a four film work by the director: with Scenes from a Parallel Life (Noroît (1976) and Duelle (1976) already completed. But investors at The Centre National de la Cinématographie backed out and a despondent Rivette sulked that he only reached half of the intended films for the project. But Rivette made this third film by raising just enough money to get it completed. When the shoot went on for too long Schneider split before the finale and was replaced by Rivette regular Hermine Karaghuez, and Dallesandro resorted to heavy drug use–which failed to improve his previous wooden acting. The oddball maniacal pic leaves us some breathtaking scenes and its experimental filmmaking techniques might interest Rivette fans or film scholars, all others be warned that this is a tough one to sit through after the first half-hour. 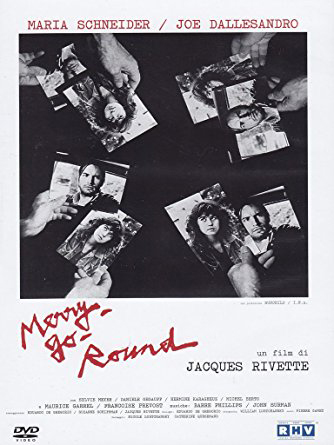