MEN ARE NOT GODS

“A tepid British drama set in the world of the London theater.”

A tepid British drama set in the world of the London theater. Austrian born writer-director Walter Reich (“Song of Scheherazade“) keeps the melodrama alive with plot twists. The title takes its name from a line in Othello.

It’s about the London stage actor Edmund Davey (Sebastian Shaw) playing Othello a bit too seriously and he attempts to strangle his wife, Barbara Halson (Gertrude Lawrence), who is playing Desdemona. Ann Williams (Miriam Hopkins) is the newspaper secretary for drama critic T. H. Skeates (A. E. Matthews), who typed a rotten review for Davey’s performance that he dictates. Barbara goes to visit the critic in his newspaper office, but only finds Ann there and pleads her case that hubby is a great actor who gets over zealous at times. Ann is touched by her story and rewrites the critique to praise the actor without the boss’s knowledge. When the critic finds out, he fires Ann. Ann attends the second performance in the afternoon, afterwards goes backstage where Barbara introduces her to her husband. Davey becomes infatuated with a receptive Ann.Rex Harrison, in a supporting role, plays an energetic young obituary writer for the newspaper carrying a boyish torch for Ann. The play becomes a hit, as the rivals vie for the affections of Ann. Barbara urges Ann to give up her husband since she’s pregnant, and she complies. During a performance attended by Ann, Othello tries for real to kill onstage Desdemona, but Ann’s shriek saves his wife.

Realizing he loves his wife, the actor gets back together with her. It works OK as light-comedy, but not as well when the unconvincing romantic melodrama becomes too sentimental and contrived. 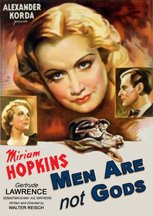