The film that landed director Jonathan Demme (“Stop Making Sense”/”Something Wild”/”Silence Of The Lambs”) into the Hollywood spotlight. Writer Bo Goldman based the screenplay upon the claims of Utah service station owner Melvin Dummar’s purported Mormon will written by Howard Hughes, leaving Dummar $156 million. Dummar claimed that Hughes bestowed the $156 million to him after he picked Hughes up as a lost bum in the Nevada desert late one evening in December 1968 and at Hughes’s request, drove him to the Sands hotel-casino in Las Vegas and gave him some spare change. The subsequent legal proceedings found his claims to be false.

Despite having a slim narrative and being merely a fable, it’s nevertheless an imaginative and highly enjoyable one. Demme keeps it comical and pertinent mainly as a keenly observed tale about the struggles of the Middle American working-class. It starts out with happy-go-lucky factory worker Melvin Dummar (Paul Le Mat) picking up a hobo lying besides the road on the Nevada desert and relating with the grouchy elderly bugger (Jason Robards) by singing the song he composed “Santa’s Souped-Up Sleigh” and shooting the breeze with his mysterious passenger. Melvin doesn’t believe it when his rider tells him that he’s Howard Hughes; after dropping Hughes off in Las Vegas he returns to his worldly problems of work, a marriage to ditzy stripper Lynda (Mary Steenburgen) that comes apart, failure as a songwriter, a gig as a milkman with limited success and a remarriage to Bonnie (Pamela Reed). She has two children from a previous marriage. The couple move to rural Utah where Melvin struggles to support the family by running a run-down gas-station Bonnie acquired, until one day in 1976 some unidentified stranger drops off the Mormon will in his gas-station.

The film is delightful in the affection it shows for its characters (never taking cheap shots at their expense), the easy going understated style Demme films this “only in America” story, the finely executed performances, and the holes that are punctured in the American Dream of attaining wealth as a means to success. It’s a refreshingly unique look at a working-class slob who is overwhelmed when he thinks he’s come into a fortune. Many have compared this film to those wonderful zany social satires done by Preston Sturges, which I have no argument with. Though acclaimed by the critics, the film was a dud in the box office. 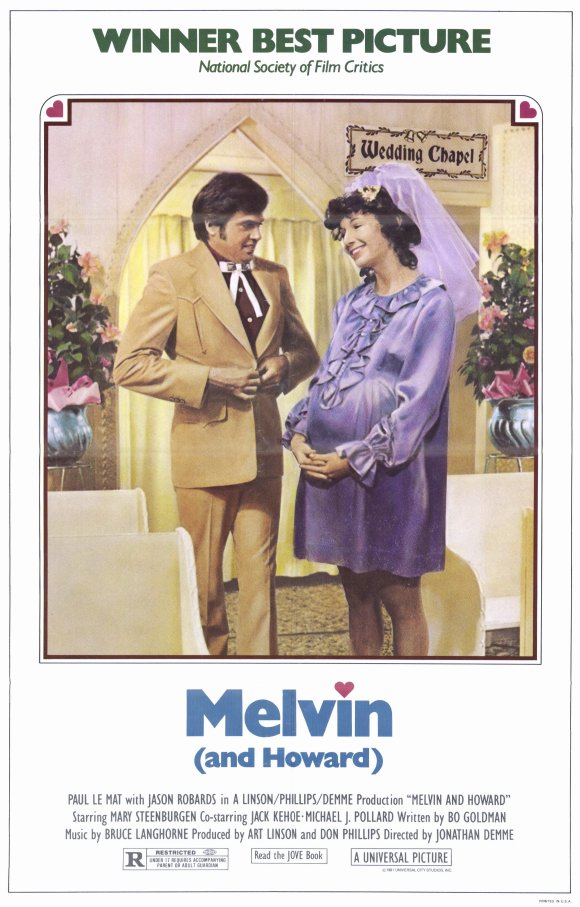