I went along for the action ride in The Matrix Reloaded, part 2 of a popular trilogy created by the Chicago-based brothers Andy and Larry Wachowski. The third part has already been shot and comes out in November, and with both films having a combined budget of around 300 million–one can expect bigger toys and more elaborate sets and combats than in the original. Matrix is a painstakingly choreographed, arduously stylized epic filled with moral superheroes, engaging villains, Japanese anime and imaginative kung fu action scenes Hong Kong style. The costumes are unique ranging from the western style priestly black duster worn by Neo to the latest in a black leather avant-garde cat suit that filled Trinity’s shapely body to Morpheus’ faux purple alligator boots. Hong Kong martial-arts fight choreographer, master Yuen Wo Ping, worked with the actors for several months so that they could make the fights look authentic and raised to the level of an art form, as in dance. Wo gave each star a signature fight move: Trinity– The Scorpion, Morpheus– The Eagle, and Neo— the triple kick move in the air. Another Hong Kong fight supervisor and wire work expert, Dion Liam, helped orchestrate the fight scenes. To be soaring through the air, the actors wear a harness attached to cables (later digitally erased) that lift and pull them in any direction.

It’s an earnest pop culture action movie with all the candy, but with a point about the meaning of life and what is existence. The first part told about the birth of the hero, the second is about the choice the hero has to make between life and love, and the final part will conclude the series with a final war between man and machines. This metaphysical science-fiction film was influenced by comic books, computers, video games, the Bible, Eastern religion, Greek mythology and some philosophers (Cornel West and Schopenhauer for starters). But you can also say that since its release in 1999 it influenced the way other action movies were made and like the mythic Star Wars, has become part of the everyday culture.

If you want a flawed thinking man’s action sci-fi flick fit for the New Age relishing the latest breakthroughs in the technology of filmmaking and a visceral film experience, then Matrix should satisfy in its simple-minded approach to philosophy and its reliance on complex fighting battles to be its staple. Perhaps, for the pop culture crowd, it even becomes a source of spiritual inspiration. Its most fascinating technology feat might be the virtual cinematography that creates a human being out of thin air (this hard to duplicate stunt was pulled-off by visual-effects supervisor John Gaeta through computer-generated digital images). The crossover with the legitimate world of science is in the inventive use of replications and robotics, and the way the technology plays with time and perspective. Otherwise, I didn’t feel the middle part had much going for it. It especially lacked a good payoff since we already know it can’t conclude without a third part. Also, I felt little emotional impact from the dramatics and never identified with any of the characters and was displeased with their stilted performances. It all seemed so sterile and humorless and video game-like, and the fight sequences were not as surprising as in the first part (it’s old hat already, as the novelty has worn off). This is epic filmmaking on the big-budget scale. Its most enthusiastic audience will be the fanatics who dissect every line and look for hidden messages throughout, and take its mythology as near religious experiences. The regular film-goer who buys into all the hype, will probably be disappointed or less enthusiastic than the already converted.

At the conclusion of part 1, a human named Thomas Anderson is soon to become known as Neo. He was found by the fanatical believer, the leader of the human rebels, Morpheus (a John the Baptist type), and affirmed as the One. Neo (appearing as a Christ-like figure) accepts that his destiny is to be the One and now must save the world run by computers that use humans as batteries for their energy needs. Trinity stands by Neo and offers her sticky love. Neo has been prophesized as the One by a rogue program within the Matrix, the inner-city matriarch Oracle (Gloria Foster-died after completing her role in Reloaded. As a result the Oracle will appear in Revolution, but in a different form.).

While possessing the qualities of universal compassion, great intelligence, expertise in the martial arts, the ability to fly through the air in his priest’s robes like Superman and to become in and out of a state of suspended liquid movement Neo, the former computer-hacker -turned-messiah who is now unplugged from the illusionary world, is searching for The Truth about the Matrix, the computer system that threatens humanity. Morpheus, on the other hand, has the leadership qualities that inspire others to believe there is a savior and he has found him. But, Morpheus, also has a dark side that is dangerous. Morpheus’ single-minded purpose is to get Neo to the Source where it will be up to the One to make his own choice what’s next. Trinity offers her strength, conviction, undying faith, and physical love to the One.

The rebellious freed humans are all huddled together in a rabbit hole underground called Zion, where they have taken refuge from the vengeful machines who have sent an attack force of 250,000 Sentinels that are programmed to reach Zion in 72 hours. Many of the residents of Zion don’t believe in the prophesy or that Neon is the One, making it difficult for them to act in unison to the threat.

Neo enters the Matrix to see the Oracle again for some more of her good advice or gibberish, depending on how you look at these sort of things. She hurls at him a Zen koan for advice: “We’re all here to do what we’re all here to do.” Neo wants to reconfirm his mission, which will be to find the Keymaker who will give him the key to the door (“the Source”) of the simulated universe. To liven things up until he gets there, there are some invigorating fight scenes (which is really what this film is all about). Diabolical exiled artificial intelligent created Agent Smith, who rejects the system that tried to delete him but hates the humans and still fights them with a vengeance, is one major obstacle in Neo’s quest for the Truth. The bland black suited and sunglasses wearing Agent Smith replicates and there are as many as a hundred Agent Smiths to fight off, as he absorbs everyone he comes into contact with. This fight became known as the Burly Brawl. There’s further villainy from the sleazy wealthy power magnate, a computer program, Merovingian, who won’t release the Keymaker. Neo has to freeze bullets in his hands to escape with the Keymaker and the other trio members have to fight their way to safety from the blond dreadlocked evil chalk-white identical twins sent by Merovingian as enforcers, who can disappear and reappear in a swirling ghost-like motion. Merovingian has his dander up that the holy trio had the audacity to snatch the Keymaker from his imprisonment. All this leads to a drawn-out 14-minute choreographed superfight on the freeway involving cars, trucks and motorcycles, as the trio tries to reach the Source. The freeway was constructed for the film at a cost of a mere $1 million on an old naval base in Alameda, California.

Other supporting players of note are the mythological computer program named Persephone, who rebels against her womanizing hubby Merovingian and tells the trio how to find the Keymaker. The film casts many African-Americans in key roles. Niobe is a freedom fighter for the humans and the love interest of Morpheus and Commander Lock. The arrogant Commander Lock is a human who opposes Morpheus and believes in using basic military strategy to fight the enemy. Link is commander of the ship with a name taken from the Old Testament, Nebuchadnezzar, and transports Morpheus, Neo, and Trinity on their mission to the Matrix. Zee is his attractive wife who wants him to take a less dangerous job that’s closer to home.

Some might find intellectual stimulation in a line that argues about free will versus destiny: 1) “We can never see past a choice we don’t understand.” Another line has a mumbo-jumbo Zen feel of wisdom: “You don’t know someone until you fight them.” But I found these retorts misplaced in a film that was not really searching for answers but only to raise entertainment to higher levels without going further. It seemed awkward and an injustice to raise so many philosophical ideas and not conduct an honest search for answers. The brothers are best in keeping the film going in a comic book form and making reality larger than life. It seems success has gone to their head and they weigh this film down with too many intellectual pretensions. The film never felt fluid. It seemed loaded down with special effects that soon wore out their welcome and uninteresting characters who failed to enliven the thin storyline.

I found it a cold watch despite being impressed with the “Reload’s” tremendous visual effects and original concept, of the real world becoming a virtual reality video game that is computer-generated. But its unpleasant cult religion flavorings and heavy ties with marketing ventures and corporate America and the merchandising of video games and whatnot, turned me off to this overblown and flat production. There’s something rotten about all the fun this film is suppose to generate, especially when for me the most challenging thing was keeping track of all the superficial characters who kept popping in and out. 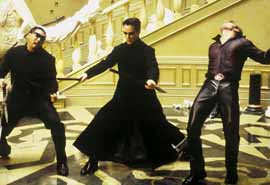 JOURNEY TO THE WEST