“Special effects are the unabashed star of this film.“

This was the fifth ‘Invisible Man’ Universal filmed in its ongoing series for the money making sci-fier. John Fulton’s special effects are the unabashed star of this film. There was one very good trick photography shot of Jon Hall putting his invisible arm into an aquarium, the arm becoming visible like a bubble and then with water delineating his invisible face to make it visible to those he’s threatening. But it is the script that does it in, as the Invisible Man is made into a heartless villain.

Warning: spoilers throughout the review.

Robert Griffin (Jon Hall) sneaks into London from Capetown on a ship, where he escaped from a prison psycho ward after murdering two people. He visits the home of his former partners in a South African diamond mine, Sir Jasper Herrick (Lester Matthews) and his wife Lady Irene Herrick (Gale Sondergaard). They were on a safari together in Africa and did not try to save Robert when he got into trouble, leaving him for dead five years ago. Robert has now come back to get his half-share of the wealth from the diamonds, but is told by the unscrupulous couple that they don’t have the money because of bad investments. He then tells them he will instead take their estate, all the money they have, and their beautiful daughter Julie (Ankers) as his bride. Irene spikes his drink with some kind of sedative and they steal his legal contract he planned to use for proof, tossing him out of their house as an unwanted guest in full view of their servant, Cleghorn.

In the woods Robert’s saved from drowning by a small-time con man, Herbert (Leon Errol). He tries to help Robert by going to Herrick’s estate with a shady lawyer, Jim Feeny, and threatening to sue. But the chief constable, Sir Frederick Travers, is called by Sir Jasper and the two con men are dismissed. Robert fearing he will be arrested, goes on the run and happens by chance to come to the isolated home of an eccentric doctor, Dr. Peter Drury (John Carradine), who has experimented with a new serum and has made his dog Brutus invisible. Before you can say have some coffee, Robert is also invisible–which is the first experiment Drury ever did on a human. When he tells Robert to get some rest he wants to show him off tomorrow to the science world and get their accolades, Robert walks out and goes to exact revenge on the Herricks.

But first Robert forces Herbert to play darts in a pub for a wager of five pounds and wins because the Invisible Man cheats as he runs the darts up to the bull’s-eyes. Robert also hears at the pub a reporter, Mark Foster (Curtis), say he’s going after a story on the rumor that there’s an Invisible Man. But what gets Robert’s goat about the reporter, is that he’s the man Julie is set to marry.

Robert goes as an Invisible Man to visit Jasper, as he frightens him into signing a confession of his misdeeds and signing over his estate to him. But when he also wants Julie, he’s told he has to be visible to have her.

When Robert returns to Drury’s lab and requests being made visible again, he’s told that his blood would have to be drained out of some living person. When Drury says he’s a scientist and not a killer, refusing to get Foster over to the lab–Griffin instead drains Drury’s blood to make him visible again on a temporary basis, as he will need a constant supply of blood. Robert also burns down the lunatic doctor’s house but Brutus, the dog, is now also visible and seeks revenge on Robert for what he did to his master.

In this episode it’s not the invisible serum that makes the man insane, as the man is already mentally unbalanced.

This hokum story could have and should have been more entertaining, as it still had the presence of the legendary John Carradine. It was a far come down from James Whale’s original Invisible Man. 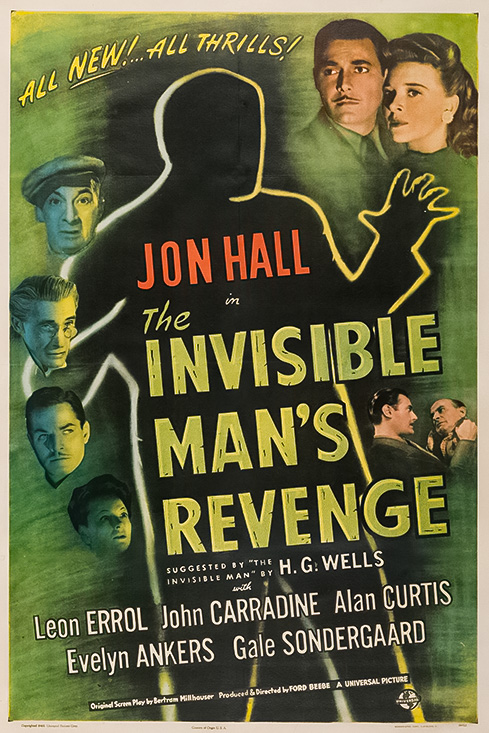