Joe Dante (“Small Soldiers”/”Innerspace”/”Gremlins”) directs this uproarious comedy that film buffs should love. The hybrid film mixes monster pic spoofs with a coming-of-age romance story and cold war paranoia. It’s based on a story by Jerico and Charles S. Haas.

John Goodman plays the lovable huckster showman Lawrence Woolsey, a William Castle-like schlockmeister, who brings in person his latest monster pic, “Mant”: “Half man, half ant. All Terror!!! So terrifying only screams can describe it!” to premiere in the local Strand Theater in Key West, Fla., during the Cuban Missile Crisis of November, 1962.

Gene Loomis (Simon Fenton), a 15-year-old Navy brat, and his kid brother Dennis (Jesse Lee) have just relocated to the base, and his dad has been sent out on one of the blockade ships to stop the Russian fleet from going to Cuba, which leaves their mom (Lucinda Jenney) anxious. Gene loves monster pics and gets a free pass to attend the movie from the blowhard Woolsey. While promoting the film Woolsey takes Gene under his wings and takes him behind-the-scenes, and boasts about his scare promotions he will introduce during the showing that include making the screen explode in “Atomo-Vision and the spine-tingling effects of “Rumble-Rama.

With the town frightened over the possibility of a nuclear attack from just 90 miles off the coast, Woolsey has a sell-out audience and hires an aspiring deranged poet, the juvenile delinquent Harvey Starkweather (James Villemaire), just released from reform school, to wear the Mant suit and work the movie aisle during the show and also work the Rumble-Rama machine. The cigar-chomping Woolsey also has a nurse in the lobby asking patrons to sign a release form that the promoter is not responsible for heart attacks. The nurse is really Woolsey’s squeeze and the star of his Mant film (Cathy Moriarty), who knows her man is full of hot air but in a wisecracking comical way goes along with his sleaze.

During the show Harvey goes ape when he discovers his former privileged girlfriend Sherry (Kellie Martin), who dresses in pink blouses, with a nerdy classmate, Stan (Omri Katz), making out during the movie and attacks him and then robs the theater of its gate receipts. The dimwitted thug also pushes the wrong buttons on the Rumble-Rama machine and the audience flees the theater in panic thinking it’s a missile attack. Gene attends the show with his little brother Dennis and with his new girlfriend Sandra (Lisa Jakub) he met during a school air raid drill. He was attracted to her when she refused to participate in the futile exercise and got a week’s detention without complaining, telling him “They put Gandhi away for a year.” I laughed out loud as the new student Gene responds “I don’t know that many people here,” obviously never hearing of Gandhi and thinking he must be a classmate.

Also in the audience is big-time movie theater owner, Mr. Spector (Jesse White, known later on as the Maytag man), who thinks Woolsey’s cheesy presentation is the work of a genius even though the balcony collapses.

It’s a beautifully realized satire on small-town American repressions, fears over the nuclear age (fallout shelters and school air raid drills), attitudes toward segregation, and 1950s sci-fi films. Though the film gets cluttered with too many unimportant teenage subplots from minor characters, it’s nevertheless an inspired film that gets things right about the American pop culture scene and its love affair with B-horror films. 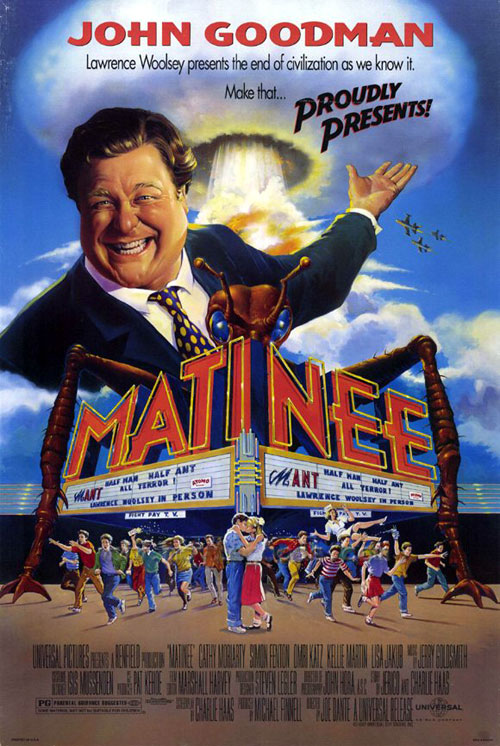