MASTER OF THE WORLD

“Destroy the world to save it” is the philosophical storyline underlying the low-budget highly entertaining but ludicrous fantasy sci-fi film set in the 19th century, that’s directed by William Witney and is based on Jules Verne’s novels Master of the World (1904) and Rubur, the Conqueror (1896). Richard Matheson provides a lively and fun-filled script. It’s about a giant flying ship (a mixture of zeppelin, cruise ship and airplane) instead of a submarine as used in Verne’s similar themed 20,000 Leagues Under The Sea. It makes good usage of stock footage and gives energy to its ultra-mod view of all that the flying machine can do. Also, does a good job showing off special effects from the early 1960s.

Captain Robur (Vincent Price) is the mad genius inventor of the space ship call the Albatross who, in 1868, flies around the world with a large crew, costumed in ridiculous sailor outfits, for the purpose of declaring war against war. His ship creates a large disturbance in the area of Morgantown, Pennsylvania, which cannot logically be explained. That causes the Weldon Balloon Society, headed by millionaire munitions manufacturer Prudence (Henry Hull), his perky daughter Dorothy (Mary Webster), and her rigid gentleman fiance Philip Evans (David Frankham) to go out in a motorized balloon to investigate. They are joined by Department of Interior geologist John Strock (Charles Bronson). When they fly near a crater, the balloon is shot down by the Albatross and they are held captive by the crazed humanitarian scientist. Robur is willing to destroy the world to rid it of evil, and soon shocks his captives by destroying an American battleship. The pragmatic Strock applauds Robur’s ends but is against his methods. With no other way of stopping the fanatical idealist as he starts destroying parts of Europe, Strock decides to save the world by possibly giving up his own life and those of the other prisoners to destroy the Albatross with a bomb.

The acting was a mixed bag, with Price in seventh heaven playing such a megalomaniac, Bronson cast against type in a top hat is decent enough and less stiff than usual, while the supporting cast offered little support in shrill performances. Though uneven, there’s much that’s good about the film that warrants a guarded recommendation. 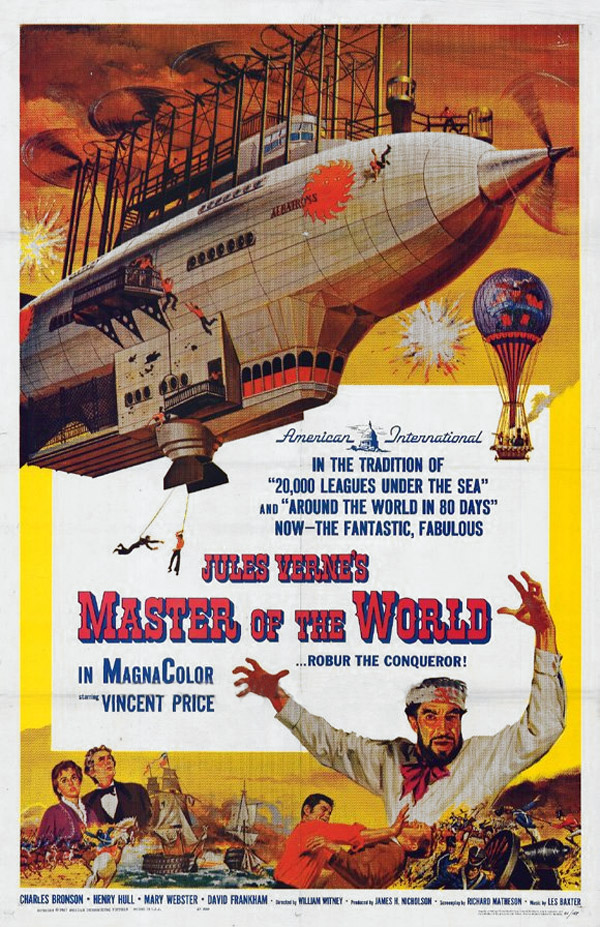