MASSEURS AND A WOMAN, THE (Anma to onna)

“Cautionary tale on the human condition as seen through the eyes of two feisty eccentric blind masseurs.”

Writer-director Hiroshi Shimizu’s cautionary tale on the human condition as seen through the eyes of two feisty eccentric blind masseurs, Toku (Shin Tokudaiji) and Fuku (Shinichi Himori). They are seasonal workers, who are walking to their next job in a mountain resort spa and take pride in passing those with sight. They tell each other “sighted people these days are especially careless. You can’t rely on them.”

At the inn, Toku becomes fond of a mysterious young woman client (Mieko Takamine) from Tokyo who is very tense. In the film’s classic scene, Toku smells her perfume in the street as she quietly observes him in the shadows struggling to find her and vanishes without a word. The viewer sees her as Toku would, which makes for some oddly powerful shots. The masseurs come into contact with other guests, such as a group of frustrated male students and a lonely man traveling with his bratty nephew.

There has also been a series of thefts at the mountain inns and the police suspect it’s one of the guests. Toku, using his sixth sense, suspects the mystery woman is the theft. When he confronts her and offers to help her escape a police dragnet, he thereby learns her sad story and why she’s a woman on the run. He also learns why even his sixth sense is fallible.

Shimizu reveals with his droll humor and delicate touch how people are lonely and can’t make connections, and how they keep bumping into each other without getting to know each other. The auteur is searching for reasons why there’s so much separation between people and wants to show how people are yearning to make a connection with a loved one but find it a very difficult thing to do. Shimizu intimates it’s because most people act as if they’re blind and can’t find what they think they are looking for, so they have to keep moving on. 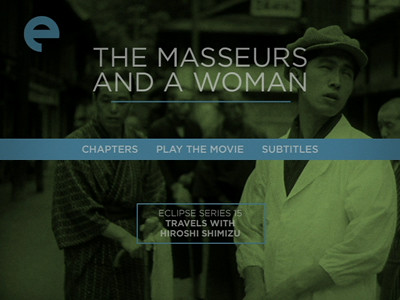