“The debut feature by Josie Rourke is a well-constructed but dull costume movie that wages its 16th-century drama between battling English queens as a feminist struggle.”

The debut feature by Josie Rourke is a well-constructed but dull costume movie that wages its 16th-century drama between battling English queens as a feminist struggle. It was not easy keeping up with all the characters coming in and out of the story, and if you didn’t know the history backdrop of the events it could be baffling since little context was given. It’s written by Beau Willimon, whose script is not always credible. It’s based on the book “Queen of Scots: The True Life of Mary Stuart” by British historian John Guy.

The 18-year-old Mary Stuart (Saoirse Ronan), the daughter of Scotland’s King James V, previously married to France’s deceased King Francis II, considers herself the rightful ruler of England but is both French and Catholic, which makes her not acceptable to either Protestant England or Protestant Scotland. Mary thereby returns to Scotland from France and her Protestant cousin, Queen Elizabeth I (Margot Robbie), the daughter of King Henry VIII and Anne Boleyn, has assumed the role of ruler and refuses a truce to legitimatize Mary as the heir to the throne but permits her to rule Scotland. When Mary catches her weak new husband, Lord Darnley (Jack Lowden), who impregnated her, with her loyal openly gay courtier/friend David Rizzio (Ismael Cruz Cordova), her rigid men advisers will kill her husband and encourage her downfall with her subjects by referring to her as the harlot ruler. Men in both England and Scotland are not comfortable with a woman ruler and inflame the situation until there can be no truce between the queens, as Elizabeth refuses to marry not wanting a king to overrule her and Mary refuses to convert. Mary must seek refuge in England from her slimy half-brother, the Earl of Moray (James McArdle) and his populist ally, the fire and brimstone Protestant preacher John Knox (David Tennant). Mary thereby seeks protection from her cousin, but is instead imprisoned and executed on the chopping block in 1587 for her attempt to overthrow her rule. But Mary’s son James will become the next ruler, because Elizabeth is unwed and barren. The film takes liberties with history (history tells us the queens never met each other).

Though straying from historical facts, it still seems as unexciting as if coming out of a textbook study. But the craftsmanship, the costumes by Alexandra Byrne and the makeup by Jenny Shircoe are excellent. As are the moving performances by Ronan as the martyred Catholic queen and the well-conceived masculine infused performance by the smallpox victim played by Robbie, as the trapped by circumstances Elizabeth forced into a harmful feud with her feisty soulmate cousin. 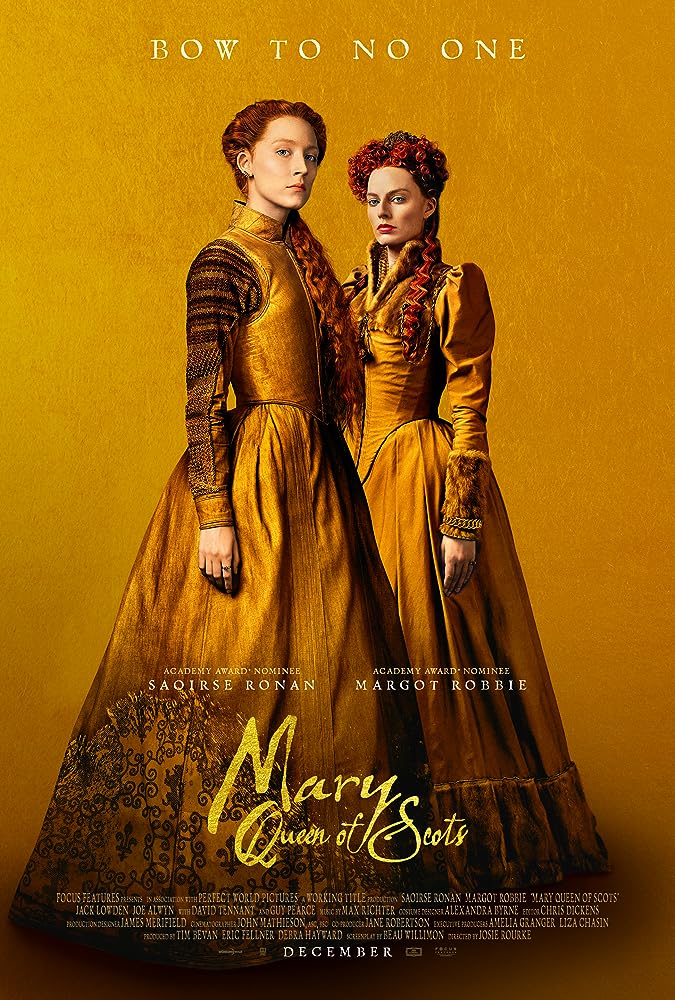