“In this season of one disappointing blockbuster after another this one, at this point of time, looks good in comparison.”

The franchise Marvel comic book film doesn’t miss a beat as Bryan Singer the director of the first two episodes jumps ship to direct Superman Returns and Brett Ratner (“Rush Hour”/Red Dragon”/”After the Sunset”), considerably less able than his predecessor, takes over the director’s chair and follows in the same formulaic way with the same serviceable results. If I didn’t know there was a change of directors, I couldn’t tell. Hopefully the suits mean what they say and this will indeed be the swan song for the X-Men series, which has grown weary with nothing new to say as it keeps repeating the same old mutant story and call for tolerance as it tells about these powerful freaks (the gifted mutants) who stick out from the crowd (the conformists)and therefore have to pay a price for their differences as there’s a clash between them.

The screenplay is by Simon Kinberg and Zak Penn, who make a stab at bringing some moral and ethical concerns to the table before letting it all sink into the simplistic.

In this tale, set in the near future, a giant pharmaceutical company run by Warren Worthington II (Ben Foster), who has a mutant son with wings on his back named Angel (Ben Foster), has discovered a new mutant “cure” which will take away the mutant’s power and leave them permanently as humans. This causes a polarizing effect on the mutant relations with humans and other mutants. Some mutants led by the moderate Professor Charles Xavier (Patrick Stewart), founder and headmaster of the Xavier School for gifted mutants, remain neutral and say it’s fine if it’s administered on a voluntary basis; while his opposite, the extremist Magneto (Ian McKellen), says you can’t trust the government to not use it as a weapon (the military weapons now can shoot darts that contain the cure) to destroy all mutants in a program similar to the way ethnic cleansing was carried out in other countries. In this series Magneto is considered the bad mutant because he rouses the mutants to attack and destroy the cure spreading humans before they have a chance to attack first. If you want my two cents, I think idealistic world peace advocate Xavier is the naive one believing the government and schooling a bunch of students, some with serious psychological issues and anger-management problems, who could easily be more deadly than a nuclear bomb.

The good, fun-loving mutants on Xavier’s side are the platinum wig wearing Storm (Halle Berry), who can control the weather; the hot-headed sharp-clawed warrior Wolverine (Hugh Jackman), who has the ability to heal his wounds and make me giggle in disbelief when he speaks of love to the man killing Jean (the world’s only known Class-5 mutant); Rogue (Anna Paquin) who can walk through walls, and when she touches someone absorb all their memories and put them in a coma; Iceman (Shawn Ashmore), who can turn fire into ice; and Cyclops (James Marsden), who can unfurl from his eyes thunderbolts of energy, which can kill and penetrate steel. They will be joined by the cabinet member in the position of secretary of Mutant Affairs, the blue, furry Dr. Henry McCoy (Kelsey Grammer) or if you prefer Beast, who works with the human president to ensure the civil rights for the mutants.

On Magneto’s side for the big final fight are Mystique (Rebecca Romijn), a human chameleon decked out in blue who can transform herself into the likeness of any person; Pyro (Aaron Stanford), the human flamethrower; Juggernaut (Vince Jones), who can take on anybody.

What changes the odds between the battle of the good mutant/government side and the bad mutants, is when Jean Grey (Famke Janssen) returns from the dead as someone not stable and joins forces with Magneto. She has put aside Xavier’s visionary teachings and has become again the Phoenix, a creature of endless desires and immense power.

The special effects department offers in the climax battle scene between mutants the uprooting of the Golden Gate Bridge and then depositing it as a gangway to Alcatraz, the site of the drug company’s cure formula. McKellen, as expected, upstages everyone and seems to be the only one in the film who is having fun with this ridiculous comic book story. It’s too bad all the other characters were caught up in the self-important script and looked either stiff or bored trying to say such terrible lines. One thing is sure, if you followed the saintly Xavier for another twenty pics or more there would be no chance of ever bringing harmony into the world through such shallow musings as presented here. But I found it bearable since I had very little expectations and this blockbuster met all I asked from it– it had momentum, impossible love trysts among the misfit spaced-out romantics and crass entertainment value. In this season of one disappointing blockbuster after another this one, at this point of time, looks good in comparison. 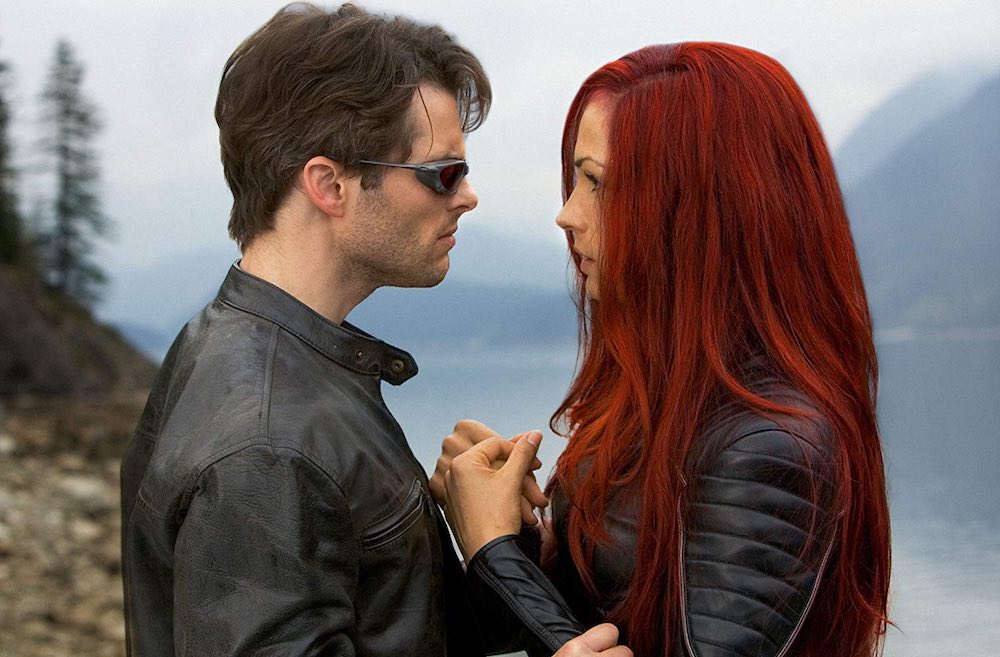