Larry Buchanan has created this cheapie AIP color film; it is one that has a great title, a dismal story, and hammy acting worthy of an amateur thespian production. It’s the kind of film that you couldn’t help either enjoying or hating. My caveat is: if you don’t take this film seriously, you are more than likely to have a better reaction to it than those who do.

The film has two featured stars: Tommy Kirk as Dop, he’s the serious, droll Martian scientist leader, here on a mission to bring back to Mars some American women for purposes of fertilization; and, Yvonne Craig as Dr. Marjorie Bolen, she’s a gritty, Pulitzer prize-winning scientific expert on Martian genetics. Tommy was a former member of Disney’s Mouse Club and was in “The Shaggy Dog.” Yvonne was a former dancer who is blessed with wonderful gams, and she was TV’s Batgirl. Neither performer was ever known for their acting skills.

A message is received from outer space by America’s security system: Mars needs women. Colonel Page (Byron) is the one-dimensional dullard in charge of the security system and when the equally dull Martian Dop suddenly appears at the control center and tells the colonel and the reporter present that because of a genetic flaw there is a hundred to one ratio of males to females in Mars, and that 5 Martians are on a mission to voluntarily bring back in a non-violent manner 5 females for purposes of reproducing more females. But the colonel refuses to abet the Martians in this enterprise. Dop disappears, but not before mentioning that the mission will go on whether or not the U.S. cooperates.

The Martians become the world’s first common enemy. They have landed in an abandoned chemical dump somewhere around one of Texas’ main cities, and have neutralized all radar systems and dishes used for detection. Dop warns his other medical missionaries that they have 24 hours to complete their mission, so they will have to resort to using hypnosis on their subjects. They are told to not eat the Earth food and to spread out. They borrow suits from a clothing store they rob, with their plan to return them before they leave. They steal currency and city maps from a filling station and steal cars from the airport parking lot, also planning to return them when they depart from Earth. The Martians observe that ties are worn here, something they discarded in Mars 50 years ago as something useless. That’s about as deep a jab at political satire this film takes.

The five women chosen as perfect female specimens, by the super-polite abductors, are all good lookers who range from being a stripteaser, an airline stewardess, a college “Homecoming Queen,” an artist, and Dr. Bolen. The longest and most drawn out abduction is with Dop romancing an all-too-willing Dr. Bolen, and we get to watch the two fall in love while they visit the planetarium. It was delightful to see them hold hands and in the end have him decide whether his love for her will cause him to disobey his mission. He must decide whether to return to Mars or jump ship. Love is something that has gone out of vogue in Mars for the last 100 years but our hero says, this is what it must feel like. She never realized he was a Martian, which shows you that even experts on Martians could be fooled. The suspense is breathtaking (sic!) as the Martians have to abort their mission with the U.S. Army on their tails, and there are genuine tears falling from Dr. Bolen!

Arguably, the film’s best scene is when the Martians need a room in a major Texas hotel that is booked solid and they get the room and the occupant’s press credentials by hypnotizing the Seattle-Sun reporter, as he looks at the reflecting lights in the pool and thereby is convinced to go home.

What goes for special effects, are tested out in scenes where women disappear and aliens appear out of thin air. What goes for a Martian wardrobe are scuba-diving space suits. On their ears are hockey pucks from which a vertical, foot-long antenna protrudes.

If you are in the mood for something inane, a film that Edward Wood Jr. would be proud of, then this one could hit your funny bone. In any case, I was in a silly mood when I saw it and was not disappointed, it was as bad as I thought it would be and I thoroughly enjoyed it. 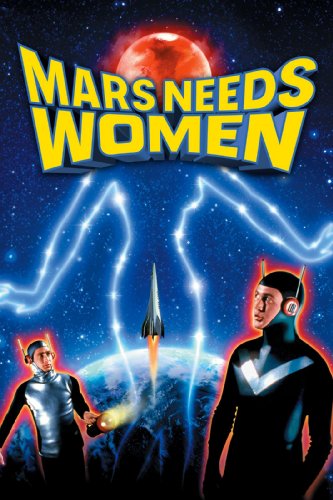 KIDS ARE ALL RIGHT, THE