Filmed previously in 1919 as a silent and in 1931, as Common Clay. A creaky romantic drama intended as a star vehicle for the gorgeous Loretta Young. Director Roy Del Ruth(“The West Point Story”/”Red Light”/”Ziegfeld Follies”) adequately helms the melodrama. It’s based on the story and the 1915 play, Common Clay, by Cleves Kinkead. The screenwriters are Gene Markey and William Conselman.

The 17-year-old Loretta Young works as a servant in the mansion of Robert Taylor’s wealthy family. While vacationing together at his family’s Maine vacation home they fall in love and secretly wed. Taylor that fall returns to finish his senior year at an Ivy League college.

Young continues as a maid even though pregnant. When the nasty family butler Basil Rathbone discovers the secret, the sleaze rats him out to his mom (Marjorie Gateson) and dad (Paul Harvey). They dismiss Young. She writes to Taylor, but the butler doesn’t mail the letters. Young gives birth to a son without his knowledge. Taylor’s parents tell their naive son she ran out on him. When Taylor learns Young had some trouble with the law as a teen, he goes along with his parents’ annulment plans. In court, it’s cleared up that Young’s previous legal troubles were when she was framed for a crime she didn’t do. Taylor realizes that he loves Young and it results in a Hollywood happy ending.

A dated film that’s a heavy slog for the modern-day viewer. 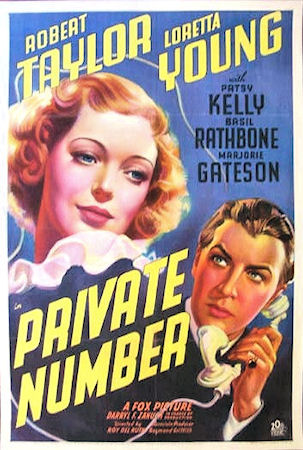