“One of the first caper films told from the criminal’s viewpoint.”

John Huston (“The Maltese Falcon”/”The African Queen”/”The Misfit”/”The Treasure of the Sierra Madre”) directs and co-writes this much admired and imitated hard-boiled film noir, one of the first caper films told from the criminal’s viewpoint, that is adapted from the novel by W.R. Burnett while the screenplay is by Ben Maddow. It’s a brilliant but dreary semi-documentary account of a meticulously planned jewel heist. What makes the film special is its gritty realism, unsparing dialogue and studied portrayal of the unlikable small-time criminals who believe they are doing nothing wrong while they carry out the detailed plans of a criminal genius. These misguided crooks are shown squandering their normal ambitions on an unworthy obsession but don’t come off all the worse when compared with a hypocritical society made up of bad cops and indifferent onlookers that are almost as debauched as the crooks are. It was re-made three other times but without the same intelligence as the original. These versions are The Badlanders (1958), Cairo (1963), and A Cool Breeze (1972).

When German accented criminal legend ‘Doc’ Riedenschneider (Sam Jaffe), known in the underworld as the ‘brain,’ gets out of prison on parole, the non-violent elderly man has a fool-proof plan for a million-dollar jewelry robbery. The elaborate plan is financially staked by crooked playboy lawyer Alonzo Emmerich (Louis Calhern). Doc recruits a small gang of petty criminals, all from the unnamed urban area (supposedly Cincinnati). Dix (Sterling Hayden, in his first starring role) is the ruffian of the gang, a struggling small-time hood who sees the heist as an opportunity to own a horse farm in Kentucky. The hunchbacked cafe owner Gus (James Whitmore), with the heart of gold, is hired to be the driver; Louis Ciavelli (Anthony Caruso) is the professional safe-cracker; and a sniveling loudmouth bookie named Cobby (Marc Lawrence) will be the “paymaster” of the operation, as the nearly-bankrupt Alonzo doesn’t have the cash to bankroll the heist.

The robbery turns sour when the night watchman’s gun drops to the floor after Dix slugs him and it goes off hitting the safe-cracker in the stomach. Though the men get the diamonds, things turn rotten afterwards. A corrupt cop (Kelley) trying to redeem himself with the police chief (McIntire) by roughing up Cobby, his longtime patsy, forces the frightened bookie to rat out his accomplices for a plea bargain deal. Later Cobby will rat the cop out as someone he bought off to protect his bookie operation, which results in the bad cop’s arrest (the cop is viewed as the one bad apple in the barrel). When the gang learns that the crooked lawyer plans to double-cross them, Dix kills the private detective Robert Brannom (Brad Dexter) who was hired by Alonzo to foul up the deal with the fence and take all the dough. Dix is seriously wounded in the gun battle with the P.I., but will take an hour longer to dramatically die from his wounds when he’s with his gun moll named Doll (Jean Hagen) at his side as the film concludes in the horse fields of Kentucky. The crooked lawyer cracks from the police heat and commits suicide. Meanwhile Doc could have escaped except for his weakness for teenage girls, which delays him at a roadside cafe where he watches for a few minutes the well-built girl dance to the jukebox music as the cops nab him.

The film’s best quote has Jaffe saying “Crime is a left-handed form of human endeavor.”

The performances are great from this ensemble cast, as the characters are well developed, observed and strongly outlined. Harold Rosson photography is a work of beauty. The narrative was taut and always tense. It’s a crime-doesn’t-pay story, but without the usual preaching. A young Marilyn Monroe has a minor role as Calhern’s mistress (who pretends to be his ‘niece’ due to the 1950s production code). 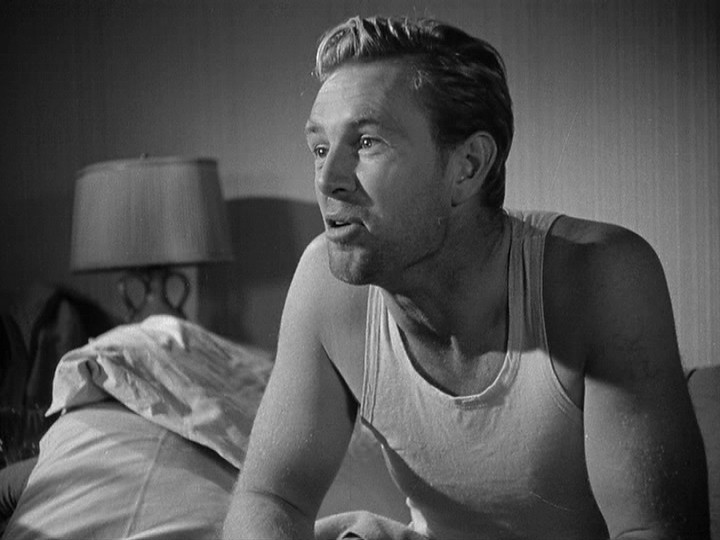