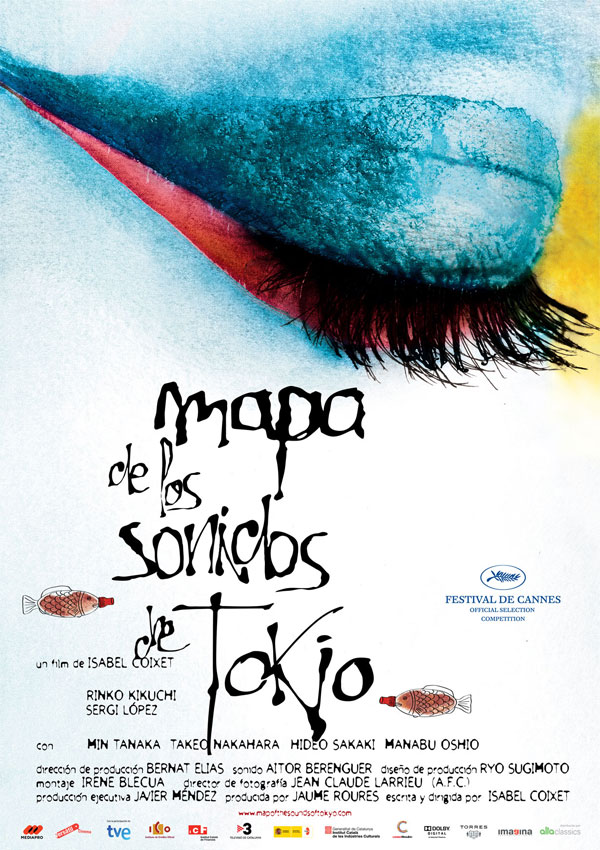 MAP OF THE SOUNDS OF TOKYO

“Too dreary to be entertaining.”

Spanish filmmaker Isabel Coixet (“Elegy”/”My Life Without Words”) is the writer and director of this stylish but melancholy love story and hit man crime drama, that is unconvincing film noir, superficial as a romance story and too dreary to be entertaining. It’s one of those slick modern films that is pleasing visually but falls apart as easily as does its lame story when looking past its superficial pretty face.

An unnamed lovesick elderly sound engineer (Min Tanaka) is the narrator, who looks back with sadness and misgivings that he did nothing to save the life of the mysterious night-shift worker at the fish market, the gorgeous young woman named Ryu (Rinko Kikuchi) he became obsessed with and had a few mostly silent dates with. She was gunned down by an assassin in the fish market. We learn that the fishmonger takes day jobs as a contract assassin, but other than liking strawberry mochis tells us little else about herself.

The pic opens with a large group of Western and Japanese businessman eating hot sushi off the navels of naked women. Shady Japanese corporate head, Nagara (Takeo Nakahara), learns at this banquet that his beloved daughter Midori committed suicide in her bathroom and left blood smeared writings on the bathroom mirror saying ‘Why don’t you love me as I love you? Nagara feels contempt for David (Sergi Lopez), his daughter’s Spanish boyfriend, who has lived in Tokyo for the last three years and owns a gourmet wine store, and blames him for the reason she died. Ishida (Hideo Sakaki), the loyal young assistant to Nagara, grants his boss’ wish to eliminate the lover and contacts a female assassin named Ryu to kill David. Instead of killing David, the laconic Ryu falls in love with him and tells Ishida she will return her fee and some additional money not to do the job. David screws her a few times in a garish love hotel room, made to look like Liberace’s subway car and then dumps her to return to Barcelona and start life anew. Before splitting David drops by Ryu’s workplace to tell her in person, you see he’s just that kind of a considerate guy, and she pretends not to be hurt and before an assassin arrives to put her out of her misery (and I might add the viewer’s) says shit to lover boy like:

“We’ve gone a few times to a love hotel.You’ve made me try interesting wines.We’ve eaten ramen.We fucked because you missed your girlfriend.That’s all.”

The plodding pretentious arthouse pic is not believable in its love relationships and further saddled with an uninteresting clinical performance by Japanese star Kikuchi, and the Spanish star Lopez seems like a lost soul, out of his elements in this pic, as he goes through the motions of trying to get us to believe he’s this sensitive lover even though his romantic lines are cheesy and it’s also hard to be convinced that he’s this hot-shot wine connoisseur taking his act to a different culture.