MANY RIVERS TO CROSS

A rube Western comedy romance with no kick, that’s set in the late 18th-century frontier of Kentucky. Under the uninspired direction of Roy Rowland (“Rogue Cop”/”A Stranger in Town”/”Excuse My Dust”) it amiably but in a plodding manner mixes comedy and action, with a few set piece fistfights cribbed from John Ford. It’s based on a story by Steve Frazee and written by Guy Trosper.

Bushrod Gentry (Robert Taylor) is a carefree marriage-averse fur trapper who must first dodge the romantic advances of Cissie Crawford (Betty Lynn), whose dad he sold his furs. Then he’s saved from a Shawnee attack by sharp-shooting frontier woman Mary Stuart Cherne (Eleanor Parker), who treats his injured arm in her family home on Barren River. Her garrulous Scotsman father Cadmus (Victor McLaglen) makes Bushrod welcome, as Mary Stuart schemes to dump oafish boyfriend Luke Radford (Alan Hale Jr.) to marry the shy handsome stranger. Mary Stuart takes the unsuspecting Bushrod to a secret cave and requests a kiss, and then talks about their future together. This marriage talk puts a scare in the bachelor, who runs away the next morning only to be tracked by the family’s Indian servant Sandak (Ralph Moody) and forced at gunpoint by Mary Stuart to return and marry her in a shotgun wedding. Her father gives her away and her rowdy four brothers (Jeff Richards, Russ Tamblyn, John Hudson and Russell Johnson) are witnesses, after fighting with the groom to make sure he stays. Bushrod spends the remainder of the film trying to flee to Canada to lose his determined wife, who keeps showing up to rescue him from jams. In the end, after crossing many rivers, he yields to what seems to be his fate and accepts the marriage after rescuing Mary Stuart from a Shawnee attack and spending the night in their secret cave together.

It’s a rather simple-minded and heavy-handed raucous frontier fake Western that never caught my fancy either with its unconvincing romance or action, and as for the comedy—that was just brutal, it might be preferable to get scalped. 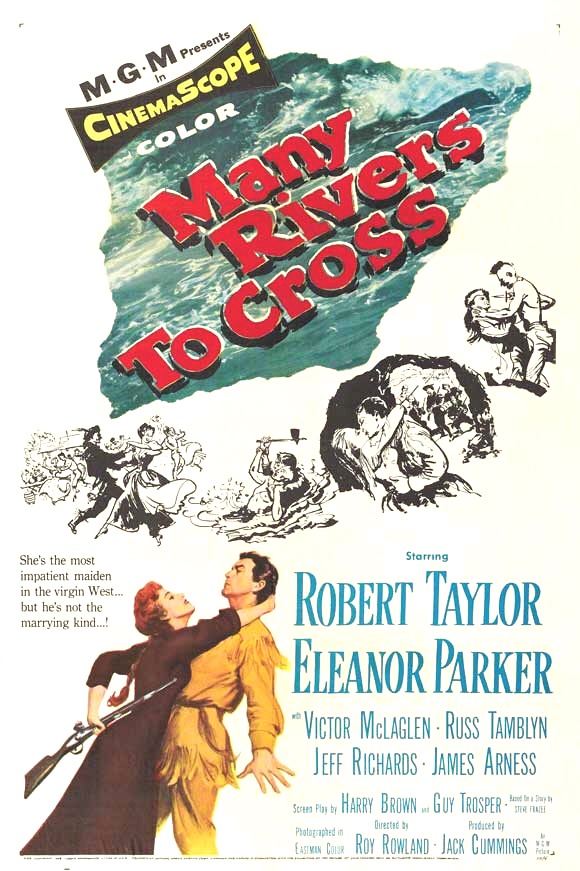