“Undistinguished but pleasing Dr. Jekyll and Mr. Hyde like thriller.”

It’s adapted from the play The Dark Tower by George S. Kaufman and Alexander Woolcott. Both witty authors were members of the renown Algonquin Round Table. The play quickly closed on Broadway, but the author’s names were pure gold and they sold the rights of the play to the movie studio.

Damon Wells is an actor, played in a hammy way by Edward G. Robinson. When he becomes concerned that his sister Jessica (Mary Astor) is being hypnotized by her sinister ex-con husband Stanley Vance (Louis Calhern), and is being controlled by him, Damon dons a disguise as a mysterious French producer named Jules Chautard to seduce the villain to meet him over a profitable deal about selling the rights to the play his wife is in. At the private business meeting, Damon drugs the baddie’s drink and stabs him to death.

Ben Weston (Ricardo Cortez), who is love with Jessica, plays the producer of the Broadway play The Dark Tower in which Jessica will make her comeback in after experiencing a nervous breakdown. Her brother Damon is also in the play. After Ben learns of Vance’s death, he rejoices.

When Detective Curtis (David Landau) investigates the murder, he tells Damon in his dressing room that Vance served time for swindling money from lady friends and murdering his first wife. Also, that clues were left at the crime scene implicating Damon, whom the detective reluctantly arrests after telling him he’ll likely receive a light sentence because the vic was such a bad character. 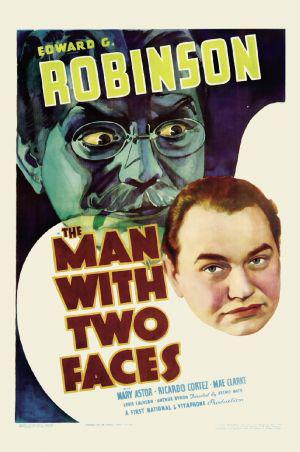