MAN WITH A CLOAK, THE

Director Fletcher Markle (“Jigsaw”/”Night Into Morning”/”The Incredible Journey”), a veteran from Canadian TV, who would later be the producer of the acclaimed “Studio One” TV series, couldn’t prevent it from being an unconvincing pretentious melodrama that is filled with literary allusions and veers between being a suspense thriller and a character study. It’s based on a story by John Dickson Carr and written by Frank Fenton.

It’s set in Greenwich Village in 1848. Madeline Minot (Leslie Caron, her second movie, after An American in Paris in 1951) arrives from Paris to visit the dying wealthy crippled old curmudgeon heavy drinking grandfather of her French lover, Thevernet (Louis Calhern), who is residing at a Village townhouse. She wants money so his estranged grandson Paul De Lage could fund the Republic. Thevernet fought with Napoleon in his youth and considers the upstart Republic the enemy. Upon pulling up by coach to the residence, Madeline is upset by the loud noises and retreats to the nearest tavern, Flaherty’s bar. In the tavern Madeline’s comforted by an eloquent cape wearing heavy drinking scholarly stranger, who goes by the name of Dupin (Joseph Cotton). When Madeline returns to the Thevernet residence, she becomes suspicious that the imperious housekeeper, an aspiring middle-aged actress, Lorna Bounty (Barbara Stanwyck), and the thuggish butler Martin (Joe De Santis), are conspiring to kill their master for his money.

With Dupin’s help, Madeline gets Thevernet to change the will to give his money to his grandson Paul. Unfortunately, Thevernet’s lawyer Durand (Richard Hale) is accidentally poisoned after drinking his client’s drink, as the hemlock intended to be taken by Thevernet after signing the will is not taken as he became paralyzed by a stroke and couldn’t reach for the glass at his bedside table. Thevernet’s pet raven, kept in the bedroom, then hides the new will in the fireplace, which the astutely helpful Dupin will recover and present to Madeline.

Jim Backus plays the Irish bartender Flaherty whose mission in life is seemingly as a sentimental man with a heart who stakes the broke local poet who wears a cape to drinks on credit until the climax when the debt reaches the breaking point and he kicks the deadbeat out and receives what he thinks is a worthless IOU for $8.70 that’s signed Edgar Allan Poe.

The black and white film, by using a fictionalized Poe as its hero, turns the line between fiction and reality into a blur. The cloaked in mystery film was both a critical and box-office failure. But despite certain reservations about the weak script, I nevertheless found it enjoyable to watch Stanwyck do her conniving Double Indemnity (1944) murderous thing, Cotton his usual elegant thing and Calhern his crusty dying old man thing with rolling eyes. Margaret Wycherly, Cagney’s mom in White Heat (1949), plays the harmless babbling cook to Calhern, and gives off with a few nice cackles. 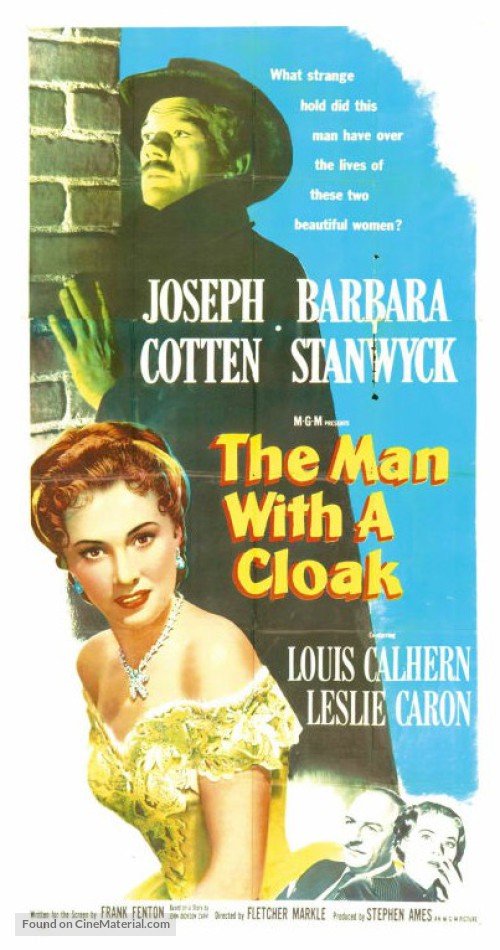