THE MAN WHO WATCHED THE TRAINS GO BY (The PARIS EXPRESS)

Harold French (“Quartet”/”Encore”) ineptly directs and writes this misfire Brit melodrama. The co-writer Paul Jericho was blacklisted and only received a screen credit posthumously in 2000. The film is based on the 1938 novel The Paris Express by the prolific Belgian writer of the Maigret books Georges Simenon. The story never works, especially when its country bumpkin protagonist, the mousy head clerk of an established Dutch firm, Kees Popinga (Claude Rains), a dreamer who closely follows the passing trains in the hope he can one day board one to escape his dull conventional life, has an abrupt life change after an accident to his crooked boss and unconvincingly his dark side is revealed.The efficient Paris police inspector Lucas (Marius Goring) introduces himself to Julius de Koster (Herbert Lom), the head of a successful Dutch business firm, in the town of Groningen. His elderly father (Gibb McLaughlin) is seen around the office boasting about his firm’s integrity. The intrusive cop asks to examine the books because of the firm’s money showing up on the black market. The meek accountant for the last 18 years, Kees Popinga, shows the detective the books and it’s confirmed they were impeccably kept. That night, the bookkeeper who invested his entire savings in the company, fears something is wrong and worries the business might go under. Visiting the office he finds the boss burning all the accountant books and runs out of the office trying to flee the country with all the firm’s funds in his satchel. The boss confesses he fell madly in love with aParis woman named Michelle (Marta Toren) and is running away to Paris to meet her, not aware that she’s using him. He tries bribing Popinga to overlook his crime, but is rejected. At the canals the boss shows him his suicide note “Death before dishonor,” but is attacked by the clerk thinking the boss will throw himself into the canal and wants to save him. Instead, after the boss by accident drowns when falling into the canal, the provincial clerk quickly scoops up the stolen money and flees by train to Paris, abandoning his wife and kids without any pause. On the train the clerk meets Lucas, and they have a provocative chat that plays out like a chess match. In Paris, the suspicious cop believes by following Michelle he’ll track down the missing clerk and uncover what his haughty boss was up to. Meanwhile it becomes ludicrous watching Popinga try to be romantic with the devious Michelle, whose treacherous boyfriend Louis (Ferdy Mayne) is ready to kill the clerk for the money. The dreary story is about as exciting as sitting at a railroad station to watch the trains go by. Even the great Claude Rains can’t save such dreck. 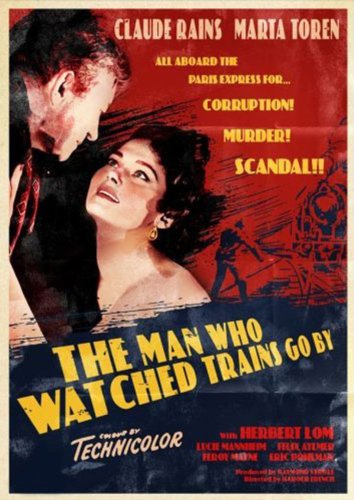