“Delivers the grind without sugar and clichés.”

A Pakistani immigrant’s trials and tribulation tale set in an uptight post-9/11 NYC, especially for those who remind New Yorkers of terrorists, that is as easy to understand as the Sisyphus myth but as difficult to really understand as to why one doesn’t get off the grind. Iranian-American Ramin Bahrani’s (“Chop Shop”/”Strangers”) bleak, subdued and compassionate urban drama, offers a slight plot but a rich character study of the polite Ahmad (Ahmad Razvi, a non-professional actor who once worked as a push cart operator), a twentysomething English speaking former rock star from Lahore now in NYC, who gets up in the dark every day at 3 AM and picks up his pushcart from the storage garage and then drags the heavy stainless-steel cart through the streets of Manhattan to his corner spot on the Avenue of Americas to sell coffee and bagels. After dusk he takes the subway for an hour’s ride back to his bare Brooklyn one-room apartment, where he lives alone, drinks a few Heinekens and stores his pirated porn DVDs that he hustles on the street for some extra cash. Ahmad makes the minimum of conversation with his regular customers, but goes out of his way to remember what they want and to be cheerful. He also converses at the newstand down the block with the white boy who trades him Parliaments for DVDs. But the pretty visiting Barcelona native Noemi (Leticia Dolera), whose uncle owns the stand, replaces him in the kiosk and Ahmad quickly strikes up a friendship with her that has some hints of a romance. She’s the only wholesome person Ahmad meets.

Slowly information about his life is leaked and we learn about his wife dying about a year ago in the city and his bitter in-laws blaming him for her death and making it difficult for him to see his sullen six-year-old son; that the hardworking man is $500 away from completing the $5,000 first installment on his cart, which will in the end cost him $15,000 (owning the cart leads to a Bicycle Thief like denouement that becomes the pivotal moment in the film); that he has his hopes raised by a wealthy former Lahore resident, the yuppie businessman Mohammad (Charles Daniel Sandoval), a customer at the push cart, who hires him to paint his luxury apartment and recognizes him as a former celebrity from a hit 1995 CD. Brushing against a former celeb has the selfish yuppie promising to help Ahmad, that is until the relationship sours; and the most touching and symbolic scenes, where Ahmad keeps a stray kitten found on the street who is as vulnerable and lonely as he is and he proves that he might love the kitten, just like he loves his son, but is clueless how to take care of either one of them.

What the film does best is capture Ahmad’s meaningless existence and how he’s somehow locked into a path where there seems to be less of a chance to escape the longer he continues following the same trajectory. Bahrani offers a sympathetic look at such a decent fellow but ignores all the other problems an immigrant might face in a new country and never lets us get into his head to understand his thinking process except through our own philosophizing or if we read Camus’ Myth of Sisyphus and existentially understood that it’s only the struggle itself that matters as existence is absurd. At the end of the day Ahmad’s just as much a mystery person to the American as probably are most of the Pakistani street vendors in NYC. But that aside, this is an unforgettable film that delivers the grind without sugar and clichés. 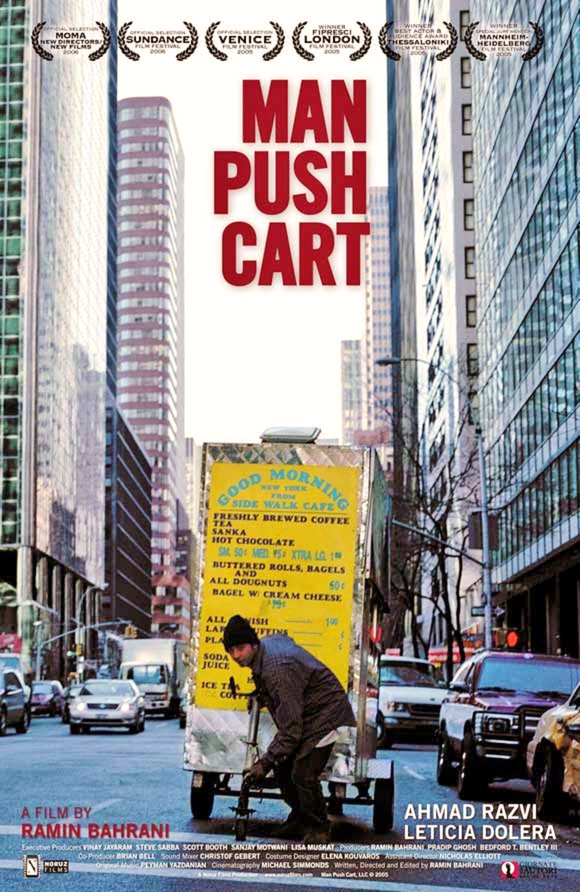