This two-fisted actioner looks a lot like Howard Hawks’s 1932 Tiger Shark. Director Raoul Walsh (“High Sierra”/”Sadie Thompson”/”The Bowery”) keeps it lively, overwrought and conventional. Writers Richard Macaulay and Jerry Wald are fine with the early action scenes and spicy macho camaraderie among the Southern California power-line repair men who work as trouble-shooters, but when it moves into familiar Hollywood formulaic love triangle turf the film goes into a mud slide. The film’s funniest and best scene is in a diner, with a colorful counterman showing a special flair in calling out orders.

Lineman Hank McHenry (Edward G Robinson) during a driving rain storm while working on emergency repairs is permanently made gimpy when burned by a hot wire. The power company promotes him to foreman since he can no longer work the lines. The close-knit unit includes Hank’s best friend Johnny Marshall (George Raft), Antoine “Pop” Duval (Egon Brecher), Jumbo (Alan Hale) and Omaha (Frank McHugh). Old-timer Pop keeps it a secret from everyone but Johnny that his trampy estranged daughter Fay (Marlene Dietrich) was in jail for clipping a customer’s wallet in a clip joint. On her jail release, Johnny escorts Pop to take her home. During her first moments of freedom she bums cigarettes, buys makeup and offers no love to dad as she calls him out as being a lousy parent.

Fay lands a nightclub hostess job in a clip joint in Los Angeles called the Midnight Club. When her dad dies in a powerline accident during an ice storm, the socially awkward Hank comes courting Fay in the clip joint and immediately offers to marry her even after she tells him she doesn’t love him. After two months marriage, she finds hubby is generous but a loser. When Hank’s working an emergency at Boulder Dam, she decides to leave him for Chicago. But when Fay visits her old nightclub boss Smiley (Barton MacLane) to get a lead for work in Chicago, the police raid the joint and she’s arrested. Johnny bails her out and brings her by bus to the rainy worksite to be with her hubby, and refuses to have anything to do with Fay after she says she loves him–even going as far as quitting the job after the emergency. A despondent Fay tells Hank she’s leaving him because she’s stuck on Johnny. While raging mad, Hank despite his bad leg climbs the pole and gets into a fight with Johnny. During the scrap Hank falls to his death, but doesn’t die until he hears from Fay that there was no hanky panky between her and Johnny. By now Johnny realizes he loves Fay and keeps her from catching the bus to Chicago.

The film is a celebration of male bonding, where even the sexy Marlene is left as second prize to blue-collar male friendship (Raft would leave her rather than spoil his friendship with Robinson). 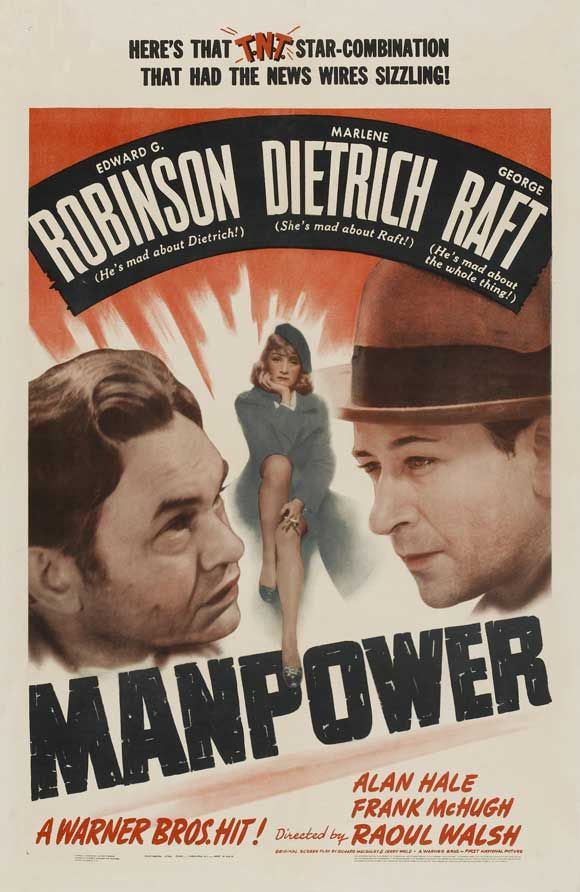