“Never as efficiently produced as Davis had hoped it would be in Brit hands.“

A British thriller that’s co-produced by Douglas Fairbanks, Jr. It’s based on the play Deadlock by Leslie Sandsand is gamely written by Val Guest. It was filmed in a London studio on a low-budget. American director Irving Rapper(“Marjorie Morningstar“/”Now, Voyager”/”The Corn is Green”)had a hell of a time trying to control the outspoken Bette Davis and her attempts to change the script. Davis chose Rapper to direct because she could dominate him and they made good films together.Fading star Davis revived her career a bit with this film, even though it wasn’t successful. The hysterical melodramatics made it a lesser quality film but nevertheless it seemed like a typical Bette Davis vehicle, where the lady goes venomous and over acts.

Feisty Janet Frobisher (Bette Davis), her pen name,is a successful mystery writer and the owner of a horse named Fury–the only thing she really loves. While at the train station in Tarnmoor, England, in the Yorkshire moors, Janet calls her lover, Larry Stevens (Anthony Steel), who is engaged to her sweet secretary, Chris Dale (Barbara Murray). Janet’s nosy neighbor, veterinarian Dr. Henderson (Emlyn Williams), drives her home. In her living room mansion a stranger suddenly appears and introduces himself as George Bates (Gary Merrill, Bette Davis’ new husband at the time-her fourth and last) and lets on that he and Janet’s long-lost husband, Preston, gone for the last three-months, recently robbed a bank together. After shooting a policeman and planting the gun on George, Preston ran off with all the money, and George is now looking for the cad. After questioned, Janet is forced to admit she poisoned her abusive and blackmailing escaped convict hubby a few hours ago with a horse compound. George observes the corpse in the study and demands bribe money to help her cover it up, and since no one in town ever met the elusive hubby–George poses as him, seeing this also as an opportunity to hide his identity. The morality play concludes with a contrived plot twist, that might be hard to swallow without a suspension of disbelief.

The claustrophobic theatrical film, shot at one primary location, with the Davis character a real nasty bitch, was watchable in an amusing campy way but was never as efficiently produced as Davis had hoped it would be in Brit hands. 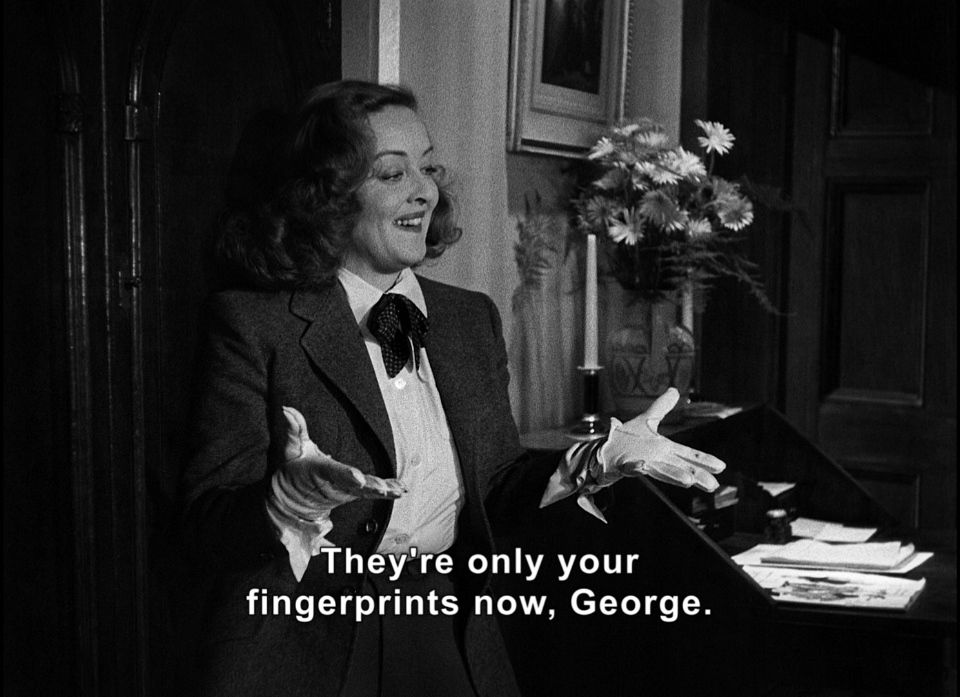