Frank Borzage (“Humoresque”/”A Farewell to Arms”/”Strange Cargo”) directs this familiar sentimental rags to riches melodrama, as the Hester Street tenement raised working-class factory seamstress Jessie Cassidy (Joan Crawford) becomes disillusioned being the breadwinner for her clueless mother (Elisabeth Risdon ), her deadbeat father (Oscar O’Shea) and wisecracking idler brother Clifford (Leo Gorcey, Mugsy from the “Dead End Kids”). To get out of that depressing NYC Lower-East-Side slum she marries fast-talking chiseler fight manager Eddie Miller (Alan Curtis). During the wedding ceremony at a Chinese restaurant, self-made Hester Street refugee, hard-working shipping magnate John L. Hennessey (Spencer Tracy), is dining there and pays for the champagne. Later the womanizing Hennessey makes a play for Jessie when Eddie lets him dance with her, but she rebuffs him.

Jessie gets a showbiz job, but can’t save anything because the ne’er-do-well Eddie needs money to get out of jail after another one of his gambling schemes fails. Eddie encourages Jessie to play up to Hennessey’s advances to get some dough out of him, and lets her attend alone a party Hennesey is giving. Hennessey gives her the $100 for Eddie, and lectures Eddie for being stuck as a small-time Hester Street con artist. Eddie asks Jessie to marry Hennessey and take him for his dough with a quickie divorce. Jessie now realizes she married a loser, and her situation is just as bad as when she lived at home. With that Jessie gets a job modeling clothes at the Mannequin and pays back the $100 to Hennessey. But she refuses to see him. Eventually Hennessey gets her to marry him even though she’s not in love with him. They honeymoon in Ireland, but Hennessey is called back by his business advisers over a dock strike that threatens to bankrupt him. When Hennessey is poor again, Jessie finds that she really loves her husband and would not go along with Eddie’s blackmail scheme. The lovebirds hock their jewelry and plan to start over again assured of their love for each other.

Joan was 29 at the time of the film and it was her first and only time she worked with Tracy (in her book she called him a scene-stealer and a bastard). It’s based on the story “Marry for Money” by Katherine Brush and written by Lawrence Hazard. It’s a woman’s pic that takes her point of view on marriage as if it were gospel. 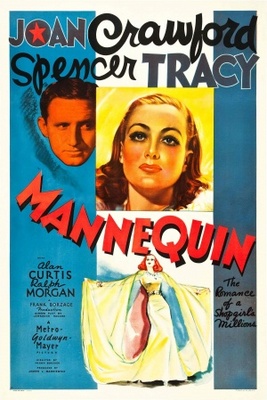