MAN FROM COLORADO, THE

“… an interesting failure that meant well but failed to deliver.”

A suspenseful, terse, psychological Western directed by Harry Levin (“Convicted”/”Where the Boys Are”/”Come Fly with Me”) from a story by Borden Chase and a script by Robert Hardy Andrews. It plays out as a stern character study questioning the traumatic effects of war on a decent man. If the film didn’t go so far over-the-top it might have been more effective in making its point, but it goes too far and any point it might have made about the ill-effects of war on the returning soldiers is swept away with the character in question, a mentally unbalanced trigger-happy hanging judge, becoming an unsympathetic monster with no redeeming human qualities. The Civil War film was obviously trying to relate its war trauma tale to the problems the soldiers from WWII were having, but it was too clumsily done to be effective. It serves instead as an interesting failure that meant well but failed to deliver.

At Jacob’s Gorge, Colorado, in 1865, in the waning days of the Civil War, no-nonsense Union Colonel Owen Devereaux (Glenn Ford) has trapped a company of Rebs and though seeing them raise the white flag of surrender orders his men to shoot. It results in a hundred men being unnecessarily killed. The colonel retreats to his quarters to write in his diary that it was the “war” that made him do such an irrational act. Later that day, the Union soldiers find out the war ended and in two days they will be mustered out of the service after three years of duty. That night Sgt. Jericho Howard (James Millican) gets drunk on sentry duty while celebrating the end of the war and the colonel has him arrested. Owen’s best pal is Captain Del Stewart (William Holden), who tells him to no avail to chill out and go easy on the men. The next day the troops return to their mining hometown of Glory Hill as heroes and are given a parade and a dance/reception is held that night in their honor. There’s a banner hung in town that proclaims Owen as their hero and says he’s “The Man from Colorado.” An official connected with the territorial governor tells Owen he’s been appointed Federal judge and Owen persuades Del to be his Federal marshal. They also love the same woman, the beautiful Caroline Emmett (Ellen Drew), who accepts Owen’s marriage proposal. That night the Reb major who ordered his men to hold up the white flag, the only one in his company to survive, confronts Owen in the town street, with Del and Doc (Edgar Buchanan), the town doctor, present. Owen gets the upperhand and needlessly kills the major. This signals to the two witnesses that Owen is a tortured man and needs help, and Del is concerned that his friend is too mentally damaged to get married or be a Federal judge. It’s also learned on the night of the dance that Jericho escaped, and Owen shows no compassion for the man only that no one has ever deserted his regiment and he’ll make Jericho pay. Big Ed Carter (Ray Collins) is the unscrupulous owner of the Great Star Mining Company and has laid claim to land belonging to many of the soldiers who were away and uses an obscure law that rules against absentee landowners no matter the reason. He has been using regulators to strong-arm the men into giving up the land and now has Owen to make it all legal. Jericho in the meantime has gathered together a number of the disgruntled miners to ride with him and holdup the properties Carter owns. When he robs Carter’s office safe of $90,000, he also kills a man. Since his younger brother Johnny’s (Jerome Courtland) gun is found at the scene of the crime, Owen gives him a quick trial and hangs him even though Del tells him not to until he returns with Jericho. When Del brings in Jericho two days later, they are surprised to find that the innocent Johnny has already been hanged and Del breaks from Owen. In an unbelievable turn, which makes the narrative even harder to swallow, Del joins Jericho’s gang. It leads to the good citizens of the town, Caroline, and the Doc also deserting the psychopathic Owen. Who becomes so incensed with jealousy that his wife ran away with Del, that he burns down the town to smoke the lovers out and in the conclusion gets his just desserts as a burning building comes crashing down on him. 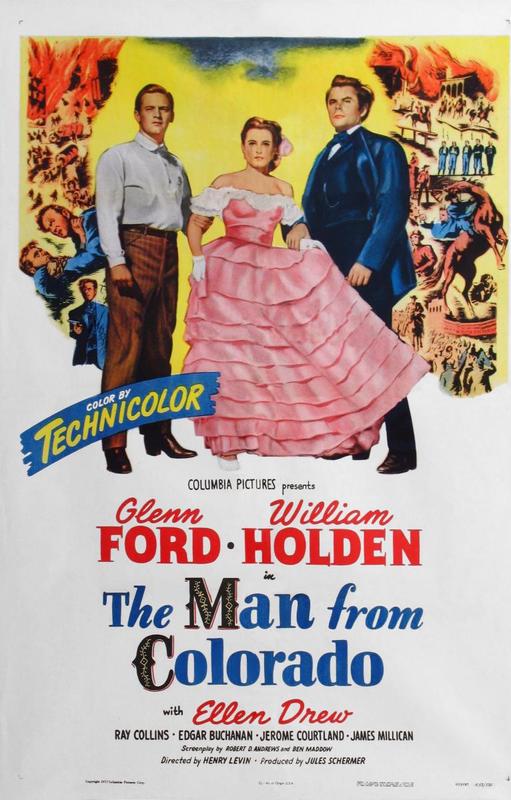