Danish director-writer Lars von Trier’s (“Breaking the Waves”/”Dancer in the Dark”) follow-up to Dogville, the second installment of his trilogy on America–a country he has never visited, but nevertheless has much to say that’s negative. It’s an anti-American rant that tediously plays out as a misplaced lecture on race by the pretentious filmmaker. Filmed as Brechtian allegory, the snide foreigner is full of himself in his morally arrogant pronouncements. Manderlay is even less an accomplishment than Dogville, as whatever von Trier is trying to convey in his somber and grating storytelling is inadequately presented, makes for dull cinema and is too muddled to mean much. The trite dialogue gets on the nerves, the uninspired acting makes it a tough watch and the artificial dramatics are irrelevant. The appeal of the movie might be to those who enjoy anything that rips into the American psyche and might count, even if only allegorically, as an anti-Bush diatribe on his “nation building” in Iraq.

The film picks up where Dogville left off with a serious narrator (John Hurt) telling us that in 1933, in the middle of the Great Depression, shortly after leaving Dogville, Grace, played by Bryce Dallas Howard who replaces Nicole Kidman, and her gangster father, played by Willem Dafoe replacing James Caan, stumble upon a gated plantation in a nondescript titular rural Alabama town still using blacks as slaves even though it was abolished after the Civil War. The idealistic Grace convinces her weak-minded dad to use his gangster power to free the slaves and sets herself up as the patronizing Great White Mother when the cruel matriarchal plantation owner Mam (Lauren Bacall) conveniently dies. Naturally things don’t work out and Grace returns to her usual self-righteous self and resorts to using violent means to set things right. This gives von Trier an opening to comment on failed American race relations, inequality, incompetence in handling things about nature (a dust storm that ruins the cotton crop because of poor planning can be compared to the Katrina disaster), liberal guilt trips and some spitefully didactic social commentary on the meaning of freedom.

Danny Glover plays the freed mild-mannered house slave; he will emerge as the sardonic voice of the filmmaker, who is almost always right. Isaach de Bankolé will play the black stud whom Grace lusts after.

It has all been heard before, thereby lacking a sense of freshness; its gimmicky bare stage effect, held over from Dogville, has little impact the second time tried (filmed on a Copenhagen soundstage); and it leaves little wiggle room for counter-arguments since the dramatics are so strained and the dispirited message that America is hopeless because of its legacy of slavery and that it’s run by thugs (in business and in the government) goes unchallenged. That it all may be true, or at least how outsiders see the arrogant superpower, nevertheless it offers no great insights into America’s problems. The storytelling is too boring and snide to advance von Trier’s argument further than the confrontational stage. 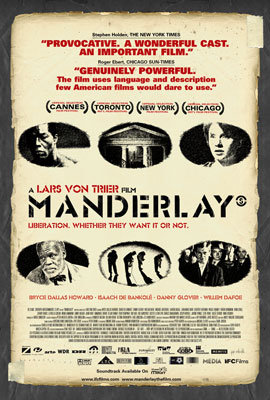