Douglas Sirk (“Written on the Wind”/”The Tarnished Angels”) ably directs this weepie woman’s pic, a remake of the 1935 film that starred Irene Dunne and Robert Taylor. It’s based on the novel by Lloyd C. Douglas, who also wrote The Robe. The film was a big hit and was Rock Hudson’s breakthrough film, where he became a big star. Jane Wyman received a nomination for Best Actress. It’s almost a miracle at how Sirk makes this preposterous melodrama come to life. It tells of a wayward playboy who sees the errors of his ways after a tragedy that holds him indirectly responsible for the death of a philanthropic doctor and leads him to becoming a Christ-like figure.

Reckless millionaire playboy Bob Merrick (Rock Hudson) crashes while going 180 mph in his high-powered speedboat for a spin around the lake. Helen Phillips (Jane Wyman) comes home to find that her saintly husband of just a few months, Dr. Wayne Phillips, has died from a heart attack. She’s comforted by her husband’s grownup daughter Joyce (Barbara Rush), as she’s informed the police borrowed her husband’s resuscitator for Merrick when coincidentally Phillips had a heart attack. All the staff at Brighwood Hospital, which Phillips ran, say it’s a shame that the wrong man died. Merrick and Mrs. Phillips meet when she unknowingly gives Merrick a ride and tells him about the resuscitator; he is immediately attracted to her and feels sincerely grief-stricken. Unable to find a way to direct his good energy, he crashes a car while drunk and is allowed to spend the night at Edward Randolph’s (Otto Kruger) home. Randolph was a close friend of Dr. Phillips and has now become a successful painter thanks to his inspiration. The artist tells of the doctor’s belief of helping others and never asking to be repaid as a mean of harnessing energy and power. Merrick meets Helen again and follows her to a taxi, and in trying to escape him she is run over by a passing car and becomes blind. Merrick befriends the blind Helen using an assumed name and secretly helps her with money matters. He secretly pays for her trip to Switzerland to have a consultation with the best doctors in the world. But the doctors believe she’s not ready for an operation. Merrick pays a surprise visit to Switzerland, where he cheers her up. When he asks to marry her, she runs away to New Mexico. Merrick, who dropped out of medical school when his father died at a young age, resumes his medical studies. After several years he becomes a splendid surgeon, who reminds everyone of Dr. Phillips. When Helen is gravely ill her female companion Nancy (Agnes Moorehead) breaks her promise of secrecy and tells Randolph where Helen is. Randolph tells Merrick and he immediately flies there. Without an operation she’s doomed, and there’s no doctor in that private sanitarium with enough experience to operate. When Merrick has doubts if he can do it, Randolph convinces him to operate on her. She’s saved and her eyesight is restored, as they embrace and prepare to face the future together.

Sirk magically turns this soap opera tale into a visionary film about overcoming blindness (both figuratively and literally). As in all Sirk films, “lighting and camera angles constitute the philosophy of the director.” In this most tender and humanistic film, Sirk proves again that he really cares about people and can even love the ones most of us can’t. 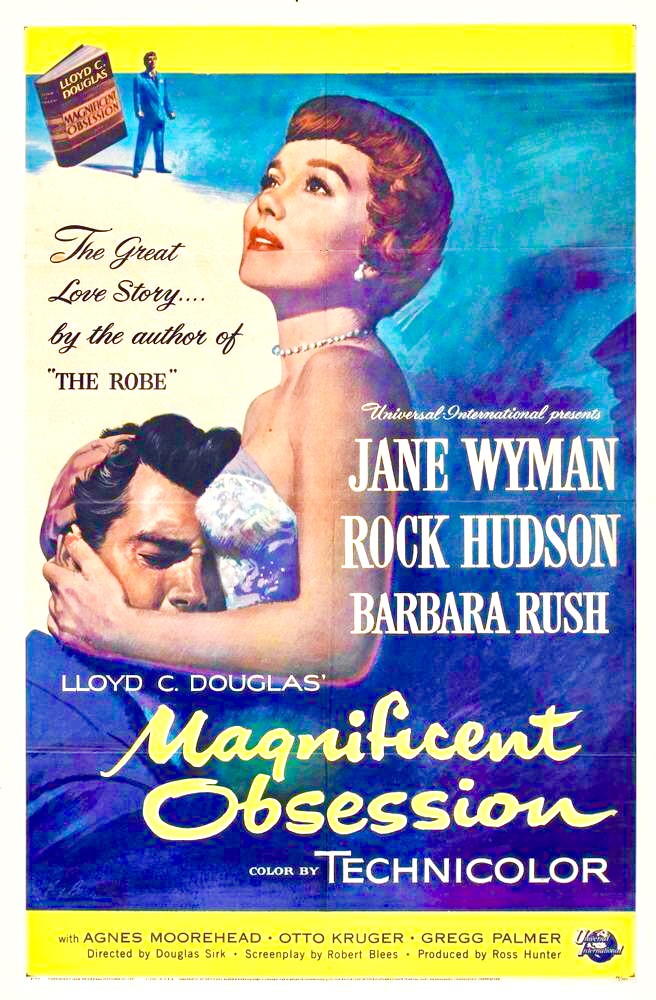