Claude Sautet(“Vincent, Paul, Francois, and the Others“/”Classes tous Risques“/”L’Arme à Gauche“) helms this entangling psychological drama with great skill. This always interesting edgy low-key drama ratchets up the tension and gloom as it tells the story of a lonely man trying to save his business and also make a love connection. Claude Neron co-writes the rich character-driven film with Sautet, where the main characters change so much they are not quite themselves by the conclusion of this twisty and unpredictable messy story set around a corrupt society.

It’s set in the country, just outside Paris. The youthful Mado (Ottavia Piccolo) is an unambitious prostitute, who takes on enough clients to live in relative comfort compared to others in the economically strapped region. The sexy former factory girl hangs out with unemployed, idealistic, and youthful “little people” and also with her client pool of older wealthy businessmen. One of her clients is a prosperous bachelor middle-aged real estate developer, Simon Leotard (Michel Piccoli). When Simon’s irresponsible business partner Julien (Bernard Fresson) commits suicide, we discover he left the company with a large debt to crooked real estate businessman Lepidon (Julien Guiomar). The debt threatens to ruin the business, as the vulture Lepidon swoops in to buy the company for a little nothing. But the proud Simon refuses to let the swine get away with his scheme, and decides to cash in all his assets to pay the unscrupulous businessman off even if that’s a risky proposition. Simon replaces the accountant skills of Julien’s with Pierre (Jacques Dutronc), one of Mado’s lovers. And with the help of Mado’s client and other lover, Reynald Manecca (Charles Denner), a convicted corrupt public works official and a petty thief, Simon finds a way to get revenge through blackmail and cooking the books. The businessmen and hippies have merged together to outsmart for the moment the conniving rival, and celebrate by visiting the parcels of country lots that they stole from him–with the hippies getting a rundown farmhouse and the businessmen lots to construct residential and factory sites. On the way home in a rainstorm their three cars get off the grid-locked main road and they all get stuck on a muddy road (this scene plays out as a metaphor on life). The good hippie guys get a chance to reflect on how they changed in order to survive in this ‘dog eat dog world’ and how they used the same unethical tactics as their crooked rival. But while they’re stuck in the mud, Lepidon orchestrates a bloody scheme to take back his spoils.

Romy Schneider, a Sautet favorite, plays the alcoholic widow of Julien, who is in love with the tongue-tied Simon, who by the conclusion has changed enough to care about her as a possible life partner. 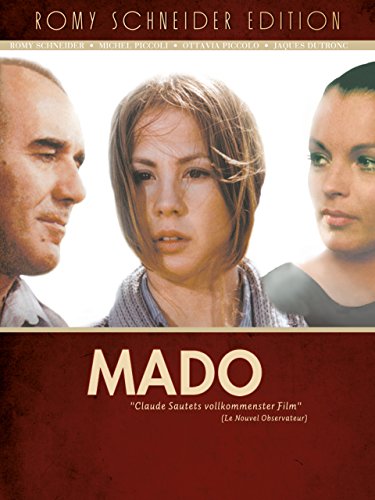