A minor Roberto Rossellini (“Open City”/”Stromboli”/”Journey to Italy”). It’s a fable about greed and treachery that mixes neo-realism, fantasy and comedy. The rarely seen film strains to leave one with this moral message: “Do good, but don’t over do it.” It’s based on a story by Eduardo De Filippo and Fabrizio Sarazani.

In a backward Sicilian small-town, whose patron saint is St. Andrea, evil seems to be winning the day according to impoverished self-righteous photographer Celestino. At night a strange elderly man with a white beard appears at his studio home and asks for shelter. Once inside, he tells the intense photographer that “the good must kill the evil.” After getting out of Celestino his hatred for the bully local cop, Agustino, over a previous spat over a woman, the stranger takes a picture of the old Agustino picture Celestino provides him with and in no time flat Agustino is turned into a statue of himself and buried. Realizing that this stranger has given him a device to kill all the evil in town, Celestino starts taking out the evil ones in town who displease him: from the greedy money-lender landlady, her two greedy rich relatives who stole her will, the Romeo son of the rich fisherman who speaks ill of the poor and the corrupt mayor who sold the town’s cemetery to rich American tourists. Celestino is not sure if the stranger is St. Andrea or the Devil, but money soon comes into the hands of the poor church and the stranger’s killing machine has the bewildered locals wondering what’s going on as before long the poor who Celestino previously idealized now also become his victims.

Rossellini never completed the film, but it was released anyway a few years later without his permission. Though it doesn’t completely work and lacks polish, it nevertheless suggests several intriguing ideas even if they aren’t fully developed that range from the power of the camera to the need for the merging of science and religion to deal with the modern world. 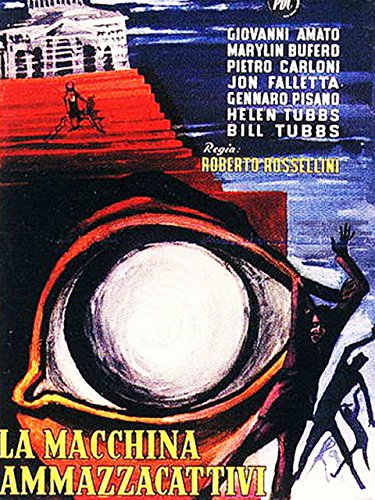