Filmmaker Eric Till’s unimaginative biopic, more manipulative than enlightening, of the 16th-century German monk Martin Luther who inspired the Reformation, reads like an overstuffed college course primer turned into a tepid historical soap opera filled with the usual stock characters. Nevertheless it successfully chronicles the monk’s life work leading to his break with the Roman Catholic Church but, unfortunately, it glosses over the brilliant monk’s dark side and ignores his prejudices completely. The screenwriters Bart Gavigan and Camille Thomasson peddle politics more than theology, setting up the argument that the battle hinged on the unyielding conservative establishment (the Roman Catholic Church) fighting for their survival against a liberal populist movement bent on destroying the Church. By the film’s conclusion, the Man is still an enigma though the filmmaker clearly sides with Luther on the birth of Protestantism and the need to break from Rome’s corrupt Church (run like a cheesy business venture). The film was made with denominational support, which probably explains its reluctance to bring up anything controversial and ruffle the feathers of the flock of 540 million.

Martin Luther (1483-1546), played with a fierceness by Joseph Fiennes, is set to be a lawyer when he is caught in a severe lightning storm and thinks he survived by a miracle. He therefore becomes convinced, in a Paul-like conversion, that he has received a sign from God to instead be a monk. This choice does not please his demanding father. By 1507 Luther was in the Augustinian order of monks in a monastery in Erfut and was spiritually guided by his kindly mentor Father Johann von Staupitz (Bruno Ganz). When Luther was rewarded with a trip to Rome for being such a promising star in the Church because of his purity and keen intelligence, he became infuriated by witnessing the corrupt sale of “indulgences” in which anyone could purchase forgiveness for their sins if they had the money and could therefore escape purgatory. Still upset upon his return to Germany, at Father Johann’s urgings, Luther left the monastery to study theology in Wittenberg. The restless scholarly student, searching for a loving God, later became a professor of theology at the college. His anti-establishment lectures proved popular as he chided the Roman officials for the corruption within the Catholic Church and encouraged the importance of faith over corrupt Roman practices. For his spirited efforts and ability to reach the locals by speaking to them in their native German tongue, he wins the support of the local prince, Frederick the Wise (Peter Ustinov), and soon has a large following among the local peasants who are attentive to his radical sermons.

The new pope, Leo X, orders the construction of St. Peter’s Basilica and to pay the costs, John Tetzel (Alfred Molina), a monk representing the Vatican, was sent out to sell special indulgences, letting everyone know the eternal consequences that awaited those who did not contribute.

Luther goes against the Church over this encouraging his followers only to give to help the poor, and now his growing popularity among the peasants alarms the Church. Their response is to call Luther a heretic and in 1521 he faces an Inquistion in Worms. His imposing adversaries are Brother Johann Tetzel and Girolamo Aleandro (Jonathan Firth), a heartless Vatican emissary. Refusing to recant his writings, Luther posts the 95 Theses on the door of the Castle Church in Wittenberg that outline his reasons why he sees the practice of indulgences as an abuse by Rome and not in line with the Scriptures. This begins the battle that causes havoc in Germany (Peasant Rebellion) and splits Christianity apart.

The picture is made watchable by Fiennes fine performance and a frail Ustinov offering comic antics in his animated expressions. Otherwise, your usual run-of-the-mill biopic. 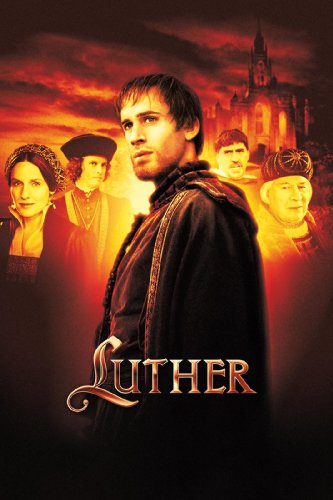