A screwball comedy set in Harrisburg, Pa., in 1988, where the ethics for the main characters become twisted. Everyone in the film can be perceived as either a jerk or an incompetent crook. “Lucky Numbers” is a fictional film derived from an actual attempt in the early 1980s to fix the Pennsylvania lottery.

Nora Ephron directs this farce with the aim to mine all the laughs taken from the foibles of the slow-witted characters and pull all the nuggets out of their characterizations that Adam Resnick scripted, as the film holds up rather well until the nonsensical ending. The film’s main assets are in the sterling cast, who all have a flair for making their roles brim with comedy. The key ingredient to this comedy is John Travolta, who was never better in a comic role; there is a good chemistry between him and Lisa Kudrow, who as a sexpot with a heart of steel is just fabulous in making her character both despicable and likable.

Russ Richards (Travolta) is a big-time celebrity in the small-town market of Harrisburg, where he’s the obnoxious, overfriendly TV weatherman and the owner of a failing snowmobile dealership due to unseasonably warm winter weather. He’s a narcissistic jerk but one who’s so corny and willing to please, that he’s oddly enough an acceptable human being. The first shot of him is driving in his 1970 Buick Riviera and waving to a car full of schoolgirl admirers and then pulling into his reserved parking spot in his favorite Denny’s restaurant and pompously taking a seat at his private table. He not only doesn’t mind being interrupted while eating to pose for a photo with a young fan and his pushy father, but relishes in all the attention he receives. It was a brilliant comic setup piece.

Russ is a straight guy living a straight life, who makes one regrettable unethical move in his entire life when he is pressed for money and is unable to borrow an advance on his salary. For this one mistake, he is made to suffer for it during the entire film. For unethical help he visits his gangster-connected old friend, a suave owner of a strip joint club, Gig (Roth), who gets him to agree to let Dale the Thug (Rappaport) rob the snowmobile place he owns as part of an insurance scam. He convinces him by saying the “Robbery is like a visit to the podiatrist.” When the robbery is botched the weatherman’s life will become a series of comic errors, and his public wall of invincible confidence starts crumbling.

Russ’s money problems increase, as the baseball wielding Dale the Thug wants his bail money paid and the money due him for the botched robbery. He, thereby, goes back to Gig for further advice and is told to think of his problem as if it was a continual medical one. The next procedure he is told by Gig is like removing a rotten tooth and to remove the tooth he should use his connections with Crystal (Lisa Kudrow), the Lotto Ball girl at the station where he works, and get her to rig the balls in the lottery. Their simple plan requires a beard to collect the winning ticket. Her uncouth cousin Walter (Moore) is recruited to be that beard and buy the ticket and collect the $6 million in winnings, and for his part in the scam he will get $20,000. His only quirks are that he quotes from the Bible, is a horny masturbator, and has a serious case of asthma.

Since all these people are goofy, they naturally get away with rigging the lottery but run into unforeseen problems. These problems lead to outrageous solutions in trying to solve them, as the asthma-stricken Walter has the ticket removed from him by Crystal when he holds out for more money; while, unfortunately, in the middle of a fatal asthma attack. A bookie who figures the scam out ends up bludgeoned by Dale; and, when the sleazy married station manager Dick (O’Neill) who is having an affair with Crystal, also figures out the scam and blackmails his employees for a rich payoff–this only leads to more complications and a visit from Dale, who pretends he is Ted Williams and Dick is the baseball.

Bill Pullman has a delightful role as an inept and lazy policeman tracking down the missing bookie and luckily rescuing Dick and Crystal from being attacked by Dale. Pullman’s slow-thinking process and keen sense of timing to draw out the comic situation, made his role a very funny one.

This was a satisfying comedy (the best way to judge a comedy is if you are laughing — and, I was). It was effortlessly well-acted, with plenty of sight gags and comical facial expression on the bewildered characters to make almost every scene a funny one. “Lucky Numbers” didn’t hit the jackpot, as the story was too shallow to allow for that, but it provided some good laughs. 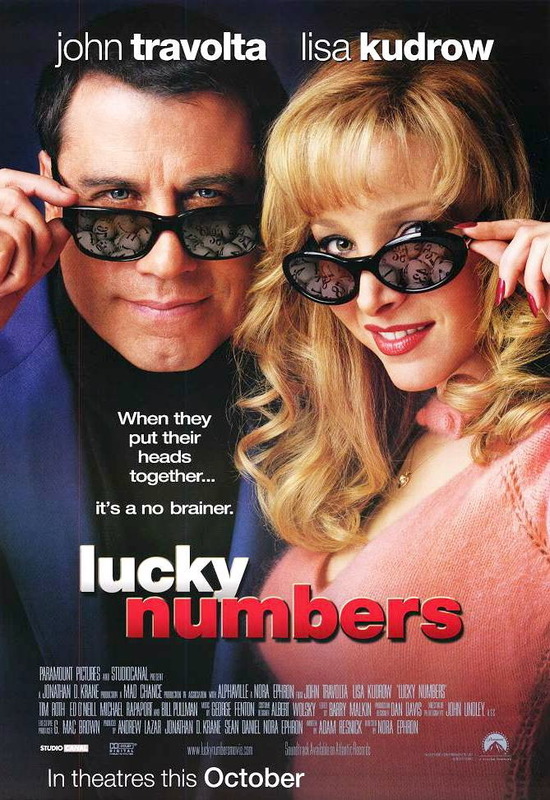